Home US Newsom tells California mayors to ‘step up’ after mob of looters make... 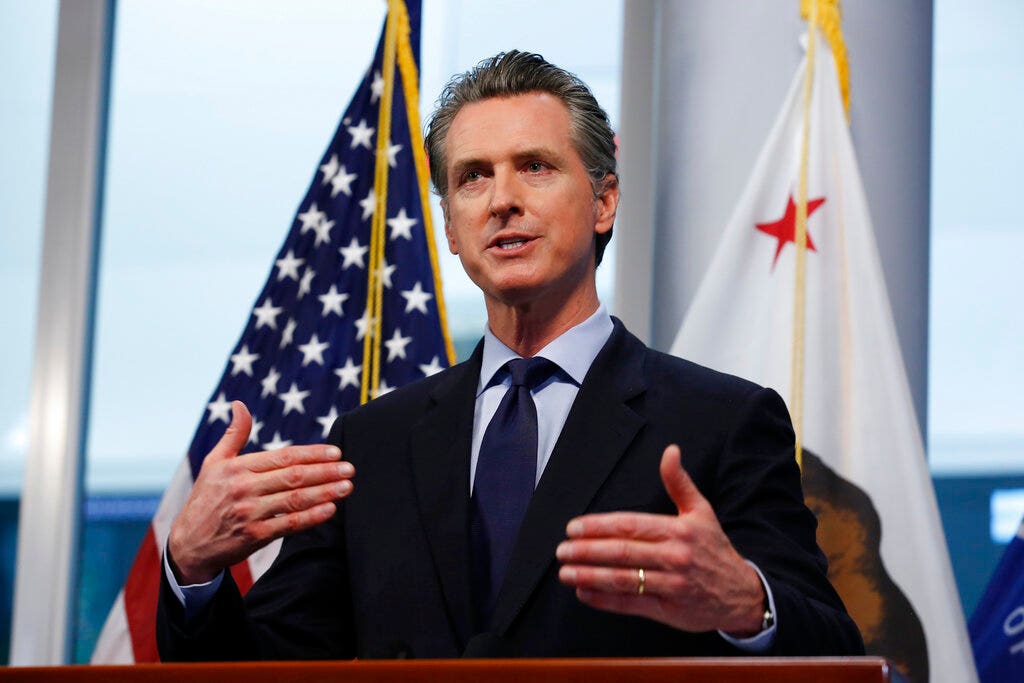 Gov. Gavin Newsom called on mayors in his state to “step up” and hold the mobs of shoplifters targeting retail establishments, including making a six-figure heist, to “account.”

“I’m not the mayor of California, but I was a mayor, and I know when things like this happen, mayors have to step up,” Newsom said Monday at a vaccine clinic in the Mission District of San Francisco. “That’s not an indictment. That’s not a cheap shot.”

California Highway Patrol presence will also be increased around highly-trafficked shopping destinations this holiday season. Patrol will most notably be increased on Interstate 680 and state Highway 4 in the Bay Area.

FILE – In this Jan. 8, 2021, file photo, California Gov. Gavin Newsom outlines his 2021-2022 state budget proposal during a news conference in Sacramento, Calif. The California Republican Party is giving $125,000 to the campaign aimed at recalling Democratic Gov. Gavin Newsom. The infusion of cash comes at a critical time for organizers, who are required to collect 1.5 million valid petition signatures by mid-March to qualify the proposal for the ballot. The funds will go toward hiring workers to gather signatures. (AP Photo/Rich Pedroncelli, Pool, File)

San Francisco District Attorney Chesa Boudin echoed Newsom and said, “if you come to San Francisco and you commit crimes, there will be consequences.”

Boudin is facing a recall election next year following repeated criticisms of soft on crime policies.

FILE – In this Wednesday, Jan. 8, 2020, file photo, San Francisco District Attorney Chesa Boudin speaks to reporters before his swearing-in ceremony in San Francisco. Boudin and others are seeking clemency from New York Gov. Andrew Cuomo for Boudin’s father David Gilbert, 76, one of the last surviving figures still imprisoned in the infamous Oct. 20, 1981 Brink’s robbery, widely seen as a last gasp of ’60s radicalism. The long-shot campaign has taken on urgency with COVID-19 raging through New York’s prison system. Chesa Boudin was the 14-month-old son Gilbert and partner Kathy Boudin left behind at a babysitter in 1981, never to return. (AP Photo/Jeff Chiu, File)
(AP)

The San Francisco area saw back-to-back mob lootings over the weekend, which targeted a Nordstrom, a Louis Vuitton, pharmacies, marijuana dispensaries and other retail locations.

In Walnut Creek, which is located about 25 miles from SF, roughly 80 looters stormed a Nordstrom and took somewhere between $100,000 to $200,000 in merchandise, according to police. Three people have been arrested in connection to the robbery.

CALIFORNIA NORDSTROM RANSACKED BY 80 LOOTERS IN SKI MASKS WITH CROWBARS AND WEAPONS: WITNESS

The crimes have also extended to San Jose, about 50 miles from San Francisco, where at least four people stole $40,000 from a Lululemon in an incident described by police as “organized robbery.”

Los Angeles also saw a smash-and-grab robbery at a Nordstrom on Monday night. Police arrested three people in connection to that crime.

Some police and retailers pointed to California’s Proposition 47 for the increase in crimes, which reduced shoplifting charges regarding the theft of $950 or less from felonies to misdemeanors.

In 2018, state legislators passed a temporary law in response to complaints surrounding the law, which established a new crime of organized retail theft. A California Highway Patrol task force was also created to help assist areas with high instances of such crimes. The law expired at the start of this year, however, The San Francisco Chronicle reported.