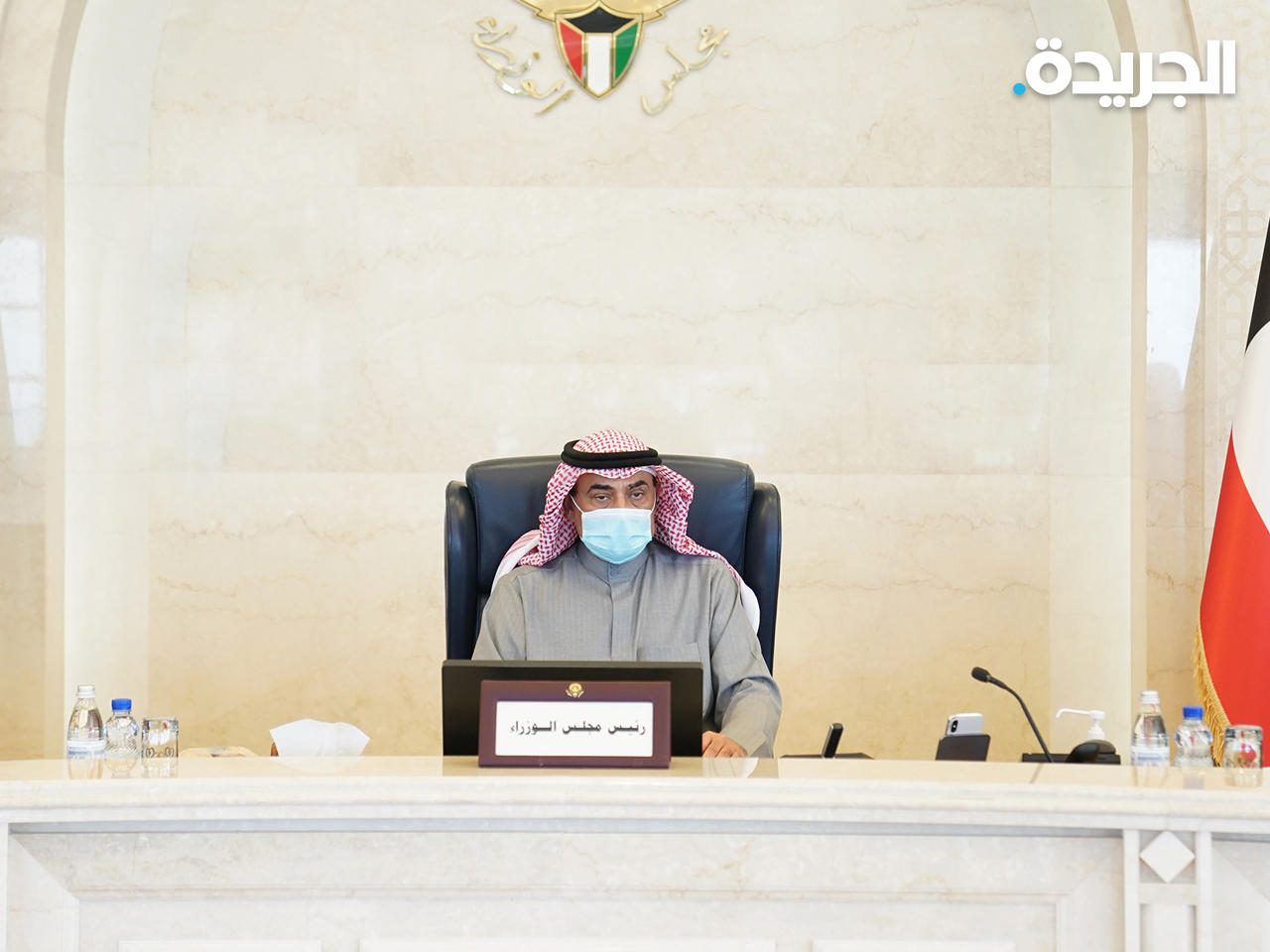 • 322,000 people in Kuwait have received vaccinations so far

The Council of Ministers held its weekly meeting this afternoon at the Saif Palace under the chairmanship of Prime Minister His Highness Sheikh Sabale Khalid al-Hamad al-Sabah.

Sources told al-Jarida that the Cabinet referred to the “Restaurant Delivery Service” during the ban period to the Health Status Committee to see the extent of its implementation as a precautionary measure.It also allowed cooperatives to operate during the partial ban.Prior reservation.

The council kept the restriction dates unchanged, and it will review the decision again next Thursday, stating that the revision and extension of the ban’s hours depends on the rate of daily injuries and family businesses, which are still at all Shine.

At the beginning of his work, the Council of Ministers presents the highest verses of greetings and blessings to His Excellency and His Majesty the Crown Prince, on the occasion of the commemoration of Israel and the Miraj, next Thursday, God protect and protect them, and the Honorable Kuwaiti. for the people.

The Cabinet then informed the Health Minister Sheikh Dr about the latest incidents related to the corona epidemic at the regional and international levels.Basil heard an explanation provided by Hammud al-Sabah, which contains the latest developments in the state of health in the country.On the number and number of cases of infection and death, and the statistics and figures of those receiving treatment in intensive care, which still are.It is seeing an increase in cure rates with declines, and the rate of positive results is higher than the number of corrections surveyed, which is an alarming indicator that reveals the rapid spread of the disease, and the Council Against Corona Virus Also noted the results of the vaccination campaign, as all people registered in the system were vaccinated to receive the vaccine.The number of residents 65 years and older and who have received the vaccine in the state of Kuwait has reached 322 thousand people so far.

In this regard, the Council of Ministers called on all citizens and residents to continue to cooperate and follow health needs and precautionary measures, so that we can all pass this epidemic with good results, the will of God.

The Cabinet has studied the recommendations of the Ministerial Committee for Corona Emergencies, and the Council of Ministers has taken the following decisions:

First: Handing over and drafting the Minister of State for National Assembly Affairs to coordinate with the Ministry of Health to expedite the draft legislation amending certain provisions of Law No. (8) of 1969 regarding preventive health precautions from communicable diseases To consider it among the priorities.Law.

Second: Delegation to the Ministry of Trade and Industry, in coordination with (Ministry of Social Affairs and Community Development, Kuwait Municipality) to implement the appointment reservation system for the entry of consumer cooperatives during the period of partial curfew.Countries, provided that shopping is allowed on the appointment system from 5 pm to 10 pm.

The Council of Ministers expressed thanks and appreciation to the employees of Ministry of Trade and Industry, Kuwait Supply Company and Federation of Consumer Cooperative Societies for their efforts to provide the daily needs of citizens and residents of all basic commodities and food items.To light the current circumstances of the spread of corona virus, to impose partial curfew in the country and to secure strategic shares.

On the other hand, the cabinet decided to accept donations made by Imad Muhammad Abdul Rahman al-Bah for the project of design, construction and implementation of a “hospital” center for neurosurgery next to the new al-Sabah hospital, 10 million. Kuwaiti Dinar.

The Council of Ministers expressed thanks and appreciation for this generous initiative and the lofty values ​​it adopted, to which it was bestowed in the interest of the beloved homeland in solidarity and eagerness to bring together members of Kuwait society.

The Council of Ministers also approved a draft, appointing Ambassador Majid Ahmad al-Dhafiri, who was the Deputy Minister for Foreign Affairs, and decided to submit it to His Excellency, the Deputy Amir, to protect the Lord.

The Council of Ministers then discussed political affairs in view of reports related to current developments in the political arena in Arabia and internationally, as the Council of Ministers expressed their strong condemnation and condemnation on a drone of the Houthi militia.The facility at Port and Ras Tanura and Aramco, in Dhahran, Saudi Arabia, insisted that the continuation of The Houthi militia promoted its heinous crimes against the citizens of Saudi Arabia and launched a booby-trapped drone. There is dangerous growth and an external violation.Targeting the security and stability of the Kingdom of Saudi Arabia, and disregarding international efforts to end the war in Yemen and bring peace to the region in a peaceful manner, invoking the international community once again immediately and sharply distracted To curb these heinous crimes.The cabinet also expressed to the State of Kuwait for its support of the brotherhood empire and all measures taken to protect its security and stability.