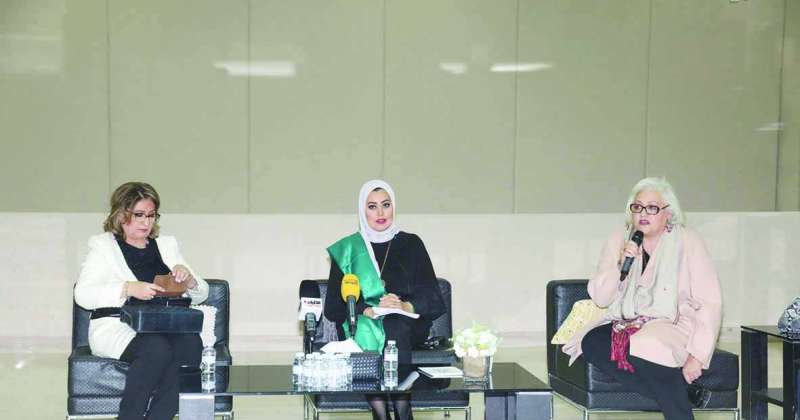 – Lina Adloul to Al-Rai: There is international pressure to empower women as leaders
– Nabila Abu Hanich: We brought in a program from Harvard to teach women the basics of leadership
– Mona Al-Arbash: Women are less corrupt than men, according to “Management and Investment” studies.

The participants, in the dialogue session organized by the Women’s Cultural and Social Society at its headquarters in the Khalidiya area the day before yesterday, called for the necessity of empowering Kuwaiti women to occupy leadership positions in various political, economic and social fields, and demanded a “quota” for women in the expected government line-up.

They pointed out that Kuwaiti women have achieved great successes and achievements in the leadership positions they assumed, calling for the need to pass pending laws that are in the interest of women, such as housing care, the naturalization of non-Kuwaiti children, the freedom to work at night, and others.

The head of the (girl for girl) program in Kuwait, Nabila Abu Hanich, confirmed the success of her program, which she brought from Harvard University, which began its activity in 2021 in cooperation with the Kuwaiti Women’s Cultural Association by organizing courses for all participants without discrimination, noting that the program depends on knowing the basics of Leadership among women, in addition to the ability to speak and communicate socially with others, through four training programs that ended within one year.

Abu Hanich touched on the laws that benefit women in the field of personal status, work and others to focus on and demand them and postpone other laws.

In turn, lawyer Mona Al-Arbash told Al-Rai that women’s economic empowerment has taken a great deal of space in recent years, and we seek to overcome obstacles and laws that hinder their entry into the labor market, in which they have proven their worth, noting that Kuwaiti women’s access to leadership positions in economic institutions has revived The Kuwaiti economy, and led to attracting investors and capital, especially since all international studies in the field of management and investment confirm that women are less corrupt than men.

Al-Arbash hoped that the expected government formation would include more than one minister, especially after Kuwaiti women had proven successful in the places where they worked.

For her part, Lawyer Lina Adloul told Al-Rai that Kuwaiti legislation is flexible with regard to women’s rights, but there are some obstacles in granting them some of their rights, such as the freedom to work at night and access to housing care, the naturalization of their non-Kuwaiti children and the pension, explaining that women’s associations A role in creating a new generation that adopts these ideas and demands.

She pointed out that there are modern commercial activities, and women have the ability to adopt such projects and succeed in them, whether by establishing a company or institution.

She explained that some women’s initiatives encouraged and adopted by the state were presented, in order to encourage women and empower them socially, politically and economically. The Kuwait indicator was also monitored in legislation that benefit women and was distinguished worldwide, although the labor law that was approved broke the rule as the legislator believed He protected women from working at night, forbidding them to do some work that he considered hard for them, considering that this was a restriction of women’s freedom.

She added that there is an international demand that women should occupy leadership positions within the agenda of sound governance, and that there should be a binding “quota” for governments in government boards to empower women. There will be attentive ears to empowering women more, increasing their cultural awareness, exploiting their experiences and giving them a greater opportunity to prove their worth.

Register with the names of the leaders

Al-Arbash explained that social laws play a major role in the stability of women in their homes and work, whether in the private or government sectors, especially that the constitution guarantees them the right to work, pointing out that the government plays a major role in encouraging women to assume leadership positions, whether as minister, undersecretary or director The Women’s Committee in the Council of Ministers plays a major role in conveying its voice to the higher leadership, stressing the committee’s role in holding training courses to help women enter the labor market. The record will soon see the light.

Al-Arbash added that the associations of public interest had and still have a role in shedding light on women, their activities and their ability to manage, through seminars and courses held for them.