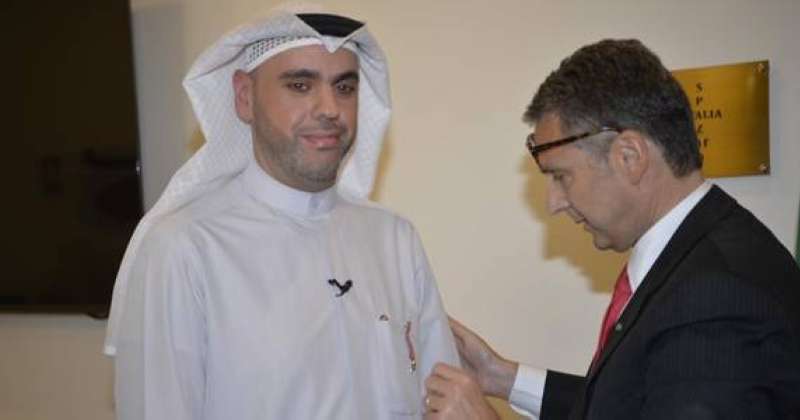 The Italian Ambassador to Kuwait, Carlo Balducci, awarded this evening, Monday, Professor of Anthropology and Archeology at Kuwait University, Dr. Hassan Ashkanani, the Order of the Star of Italy, with the rank of Knight, in recognition of his efforts to strengthen intellectual, cultural and academic ties between the two friendly countries.

Ambassador Balducci, in a speech he delivered at a ceremony held by the embassy on the occasion, in the presence of a crowd of academics, intellectuals and culturemen, praised Dr. Ashkanani’s efforts in organizing the first activity in the Arabian Gulf by establishing the first winter school for archeology at the Faculty of Social Sciences in January 202 and inviting professors from the oldest university in Italy ( University of Rome La Sapienza).

He noted the role of Dr. Ashkanani in collecting rare Italian books and artifacts that talked about Kuwait since the 19th century, stressing the depth of the historical relations and friendship between the two countries.

For his part, Ashkanani said in a statement to Kuwait News Agency (KUNA) on the sidelines of the ceremony that this medal is “from the grace of God Almighty and the efforts of my colleagues in the college and department, anthropology students, my loyal friends and my beloved family.”

He expressed his pride and happiness with this honor, which he received from a European country with a long history, saying, “I am a soldier for my homeland, Kuwait, for its history, culture and heritage, and for its good people.”

This medal is considered the highest honor granted by Italy to people of merit in the fields of literature, arts, economy, public service, social, charitable and humanitarian activities, and for long and outstanding service in the fields of civil and military work.

Dr. Ashkanani is one of the most important collectors of ancient books for Italian travelers who witnessed the regions of the Arabian Gulf, specifically Kuwait. He owns the rarest book by the oldest Italian traveler who visited Kuwait in 1862, Doctor Marco Mosizzano, surgeon in the royal house and a member of the mission of the King of Italy Emmanuel II. The book is a copy of the two copies found so far. .

The book includes the desire of the King of Italy to obtain the finest Arabian horses that Italy needed during the wars of its unification, and Kuwait was one of the important stations to purchase these horses from the merchant Youssef Al-Badr. The book also includes the meeting of the Italian king’s mission with the ruler of Kuwait, Sheikh Sabah bin Jaber bin Abdullah Al-Sabah (the fourth ruler of Kuwait ) and described his personality and hospitality.

Dr. Ashkanani also owns a number of Italian magazines from the 1950s that contain rare news about Kuwait and its rulers.

Dr. Ashkanani is an associate professor at the College of Social Sciences and supervises the Museum and Archeology Laboratory at the College and scientific research on the archeology of Kuwait in the Stone Age 7000 years ago in the Subiya area and 4000 years ago from archaeological sites on Failaka Island and other sites from the Kingdom of Bahrain and neighboring regions. He has six books on the archeology and heritage of the state Kuwait.