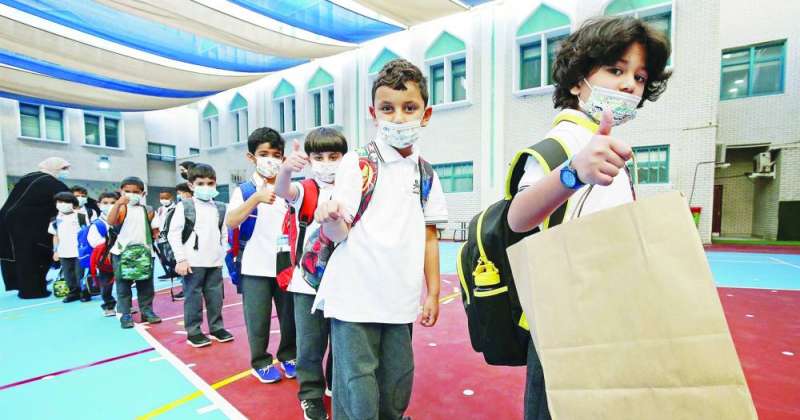 Teachers are ahead of time to finish the curriculum before the end of the semester
Educational warnings of an academic achievement crisis in light of the increasing educational loss
Distributing the surplus of service implementers, when available, to schools, coinciding with the expected comprehensive return

While the first semester of the current academic year is experiencing its last days, with the Ministry of Education setting next Thursday, corresponding to 16th of this month, the date for the end of the first semester curriculum in all educational stages, a calculation conducted by Al-Rai on school days during this semester revealed that the total The study for students amounted to only 25 days for each group of groups “A” and “B”, which is considered the lowest number of days for a semester in the history of the Ministry of Education schools.

While students in the intermediate and secondary levels are preparing for the end-of-semester exams set between January 26 and 29 for grades six to eleven, and on January 12 for students of the twelfth, an educational source revealed to Al-Rai a crisis in the students’ academic achievement, stressing that “there is no difference Between the current urban education and the distance education system during the past year,” adding that “the educational loss is great in the two systems, and this must be remedied, with a speedy comprehensive return, at the beginning of the second semester.”

In a different context, the Assistant Undersecretary of the Ministry of Education for Administrative Affairs, Raja Bouarki, denied to “Al-Rai” the existence of a hygiene crisis in the Ministry of Education’s general office in southern Surra, stressing that “despite the end of the current contract, there are about 200 service outlets in the building of those appointed to the Ministry’s contracts, There are no problems in this aspect in all sectors, departments and sections.”

Bouarki stated, “Some foreign departments request cleaners from the General Services Department in the ministry, while it is supposed to submit their letter to the administration of the educational district to which they belong,” noting that “the administrative sector has, during the past months, enhanced the number of service implementers in the educational areas whose contracts have expired.” By making transfers for some workers in the Farwaniya area. She explained that the ministry is going to offer cleaning contracts for all educational areas, with the exception of the Farwaniya area, which has certain workers on the ministry’s contracts, stressing that there is no conflict between the new tenders that will be offered and the existing local contract for service implementers.

For his part, an educational source confirmed to Al-Rai that the surplus numbers of service implementers, if any, will be distributed to schools, coinciding with the expected comprehensive return in the second semester.

He said that the ministry has freedom of choice in the future, and if it fulfills the required number of local contracts, the experience of the Farwaniya region may be generalized to all its regions and central administrations, and it has succeeded in providing cleaning services for its schools and buildings, without entering into the problems of workers’ sit-ins for companies over non-disbursement of their wages Pointing out that the total number of workers allowed for the ministry to contract with him does not exceed 2,100 workers, according to the Civil Service Bureau book, which makes dispensing with companies difficult during this period.

An educational source stated that the Ministry of Education had stipulated in all its previous contracts with companies, before the “Corona” crisis, the provision of about 10,000 cleaners who would be distributed to educational areas, the Ministry’s general office and schools, with numbers ranging from 8 to 10 workers in each school, while it cannot Now providing about half of this number, as the health crisis contributed to the emigration of a large number of workers, which prompted most school principals to use their domestic workers to equip their schools at the beginning of the current academic year.

The source explained that the provision of human cadres and manpower has become one of the biggest difficulties facing private companies in their contracts with government agencies, whether in cleaning work.

Or guarding or hospitality, pointing out that «many companies were providing domestic workers, who were not under their sponsorship before the health crisis, and they were introduced to schools. How now, after a large number of workers have traveled since the health crisis began in February 2019?