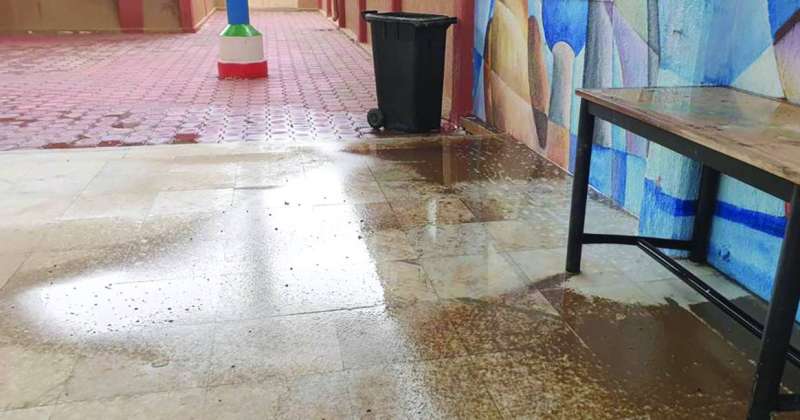 With the launch of “off-schedule” exams for secondary schools in the subjects of the constitution and the Holy Qur’an yesterday, and the Ministry of Education’s announcement of the exam schedules, school administrations confirmed that there were no losses after the rain wave that fell on the country the day before yesterday and continues, according to meteorology, until today, Monday, stressing that “ The effects of the rain are limited and there is no damage or damage to any of the school facilities.”

Some school principals revealed to Al-Rai a complete alertness to the engineering affairs departments in the regions, as they dealt very quickly with the incoming communications, most of which were regarding Al-Khair, and this is expected, pointing out that the water pools are simple in the science yards and other facilities and do not affect the course of the study.

While they confirmed that there were no short circuits and that things went in their usual way, they mentioned that the absence rate is large in middle schools, other than primary schools whose students started with short exams and continue until the end of this week.

They explained that each school has its own system for organizing “off-schedule” tests and distributing students, but most of them received their students yesterday in full (the two groups together), with each group divided into one semester, where students present the constitutional tests for the twelfth and the Qur’an for the three grades. After that, they start a temporary vacation, in preparation for the mid-year exams on December 29.

In a related context, the Assistant Undersecretary of the Ministry of Education for General Education, Osama Al-Sultan, approved, yesterday, the exams schedules for the end of the first academic period for the secondary stage for the departments (scientific and literary) and religious education, which will start on the 29th of this month and end on the 24th of next January. And the ministry announced, in a press statement, that half an hour (for students with learning difficulties) will be added to all subjects, based on the decision of the General Directions Council, to add 15 minutes to the examination time for each field of study, to give students time to read the instructions and check the number of question papers.

An official source confirmed to Al-Rai that “the engineering teams in the educational zones toured the schools to deal with any damage that occurred or may occur as a result of the upcoming rains, God willing, and there are backup plans they have in case the electricity boxes are exposed to any malfunctions, and they will submit their reports to the assistant undersecretary for facilities. Education regarding the mechanism of dealing with each school separately.