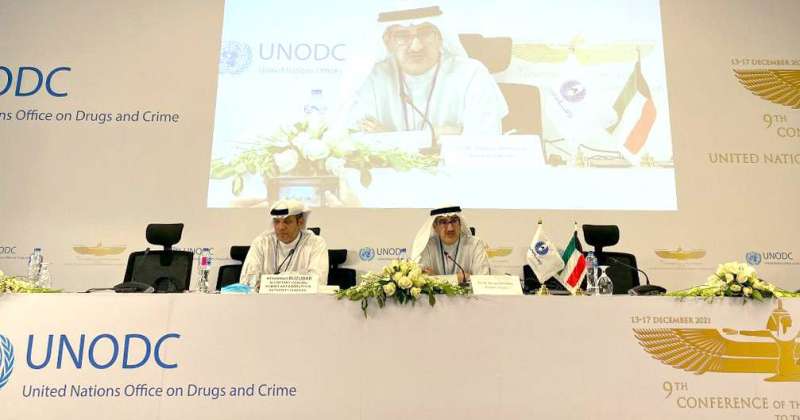 Al-Ibrahim: We are keen to strengthen Kuwait’s position in international anti-corruption forums

Head of the Public Anti-Corruption Authority in Kuwait “Nazaha” Abdulaziz Al-Ibrahim said that Kuwait has taken strong preventive measures and strict measures in the anti-corruption file, in accordance with the provisions of the relevant United Nations Convention in this regard, in full.

Ibrahim reviewed, during a special session on the fourth day of the Conference of States Parties to the United Nations Convention against Corruption, in its ninth session, held in Sharm El-Sheikh, the axes of enhancing integrity, addressing and preventing corruption, within a broad framework that includes cooperation with the public and private sectors and civil society, and a mechanism The comprehensive response against corruption, stressing the keenness of the “Integrity Commission” to enhance Kuwait’s standing before international forums concerned with preventing and combating corruption.

For his part, the Acting Secretary-General of (Integrity) Dr. Muhammad Buzbar stressed today the importance of the role entrusted to the authority in accordance with the law of its establishment in 2016 regarding the necessity of combating corruption and protecting Kuwaiti society from its consequences. Comprehensive Anti-Corruption in Kuwait” on the sidelines of the activities of the ninth session of the Conference of the States Parties to the United Nations Convention against Corruption in Sharm El-Sheikh.

In this context, Buzbar reviewed the directives of the late Amir Sheikh Sabah Al-Ahmad Al-Jaber Al-Sabah on the necessity of combating corruption and its great impact in accelerating the accession of the State of Kuwait to the United Nations Convention against Corruption. He pointed out that in light of this, the State of Kuwait, under Law No. 47/2006, ratified the United Nations Convention against Corruption, stressing the importance of exposing corruption, investigation, disclosure and disclosure of financial disclosure in preventing, combating and preventing corruption.

He referred to the (Integrity) partnership with the public and private sectors, indicating that reporting corruption crimes is the duty of every person and that the freedom, security and tranquility of the reporter are guaranteed in accordance with the provisions of the law. He also referred to the importance of reporting incidents of corruption (financial crimes of grave corruption incidents), while the legislator assigned this national task to a natural and legal person alike, “considering that it is possible to submit reports from bodies subject to the law against another government agency.”

Bozbar pointed to the categories under the jurisdiction of the Anti-Corruption Commission, which are the legislative, executive and judicial authorities, as well as cooperative societies and state-owned companies. He explained that corruption crimes within the scope of application of the provisions of the law relate to crimes of assault on public funds, bribery, abuse of influence, combating money laundering, terrorism financing, forgery and counterfeiting, as well as crimes related to the course of justice. He also referred to the crimes of illegal gain, customs evasion, tax evasion and crimes of obstructing the work of the authority or pressuring it to obstruct the performance of its duties, interfering with its functions, or refraining from providing it with the required information stipulated in the law.

Bozbar also referred to the crimes stipulated in the law regarding the protection of competition and the disclosure of commissions offered in contracts concluded by the state and any other crimes stipulated by another law as corruption crimes. He pointed out that the Corruption Detection and Investigation Sector by receiving complaints, reports and information on corruption incidents continued to receive complaints via e-mail in light of the exceptional circumstances that the country has experienced since March 2020 to date, resulting from the (Covid-19) pandemic.

He stated that the commission follows up and studies the corruption incidents that come to its knowledge in any way and through what is published by the various media of information and news, and conducts the preliminary investigation work, summons the whistleblower and takes his statements to ensure his confidentiality, summons witnesses and experts, and performs the work of judicial police. Buzbar referred to the authority’s role in following up on the final and precautionary measures of seizing and recovering funds resulting from corruption crimes and serious financial violations, as well as the crime of benefiting from illegal gain taken by the competent authorities.

He also pointed out that the system for disclosing the financial disclosure of public servants in the State of Kuwait “is one of the most important and most effective tools for preventing corruption in protecting public money and limiting the exploitation of public office,” adding that “this is what the United Nations Convention against Corruption called for.” He added that one of the objectives of financial disclosure is to prevent financial corruption, enhance control and accountability for everyone who assumes a public position, protect public funds, and help detect and prosecute perpetrators of corruption crimes among public officials, in addition to enhancing the credibility of the public administration and fortifying the public job.

Bozbar indicated that Nazaha, in cooperation with the Supreme Council for Planning and Development, the United Nations Development Office and the United Nations Office on Drugs, signed a project document for preparing the comprehensive national strategy for integrity, transparency and anti-corruption on December 17, 2017. He pointed out that the principles of preparing Kuwait’s strategy to enhance integrity and combat corruption (2019-2024) is related to patriotism, participation, inclusiveness, realism and responsibility in light of a vision based on trust and full respect for the principles of transparency, accountability, rule of law, and community participation in rejecting corruption.

He explained that the strategy’s message is to enhance the values ​​and rules of integrity and combat corruption in the public and private sectors and the Kuwaiti society in general, in a way that contributes to achieving sustainable development. The Public Anti-Corruption Authority (Nazaha), headed by Ibrahim, is participating with a high-level delegation that includes a group of the authority’s specialists, in the meetings of this ninth session, which concludes tomorrow.