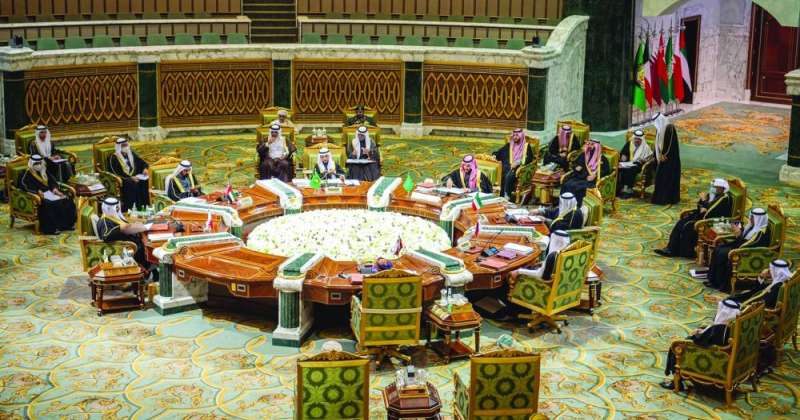 Emphasis on moving on the path of integration and unity to face challenges
– Any attack on any country of the Council is an attack on all of them
Completion of the elements of economic unity and the joint security and defense systems
Develop the integration of road, rail and communication networks
Coordination of efforts to combat climate change, epidemics and diseases
Enhancing the role of women and youth in the economy and business
Respect for the principles of sovereignty and non-interference in the internal affairs of states
Condemning the Iranian-backed Houthi militia’s continuation of its terrorist activities
The necessity of Tehran’s commitment to the principles of good neighborliness and non-use or threat of force
The importance of the participation of the GCC states in any negotiations with Iran
– Calling on Lebanon to carry out reforms and prevent “Hezbollah” from carrying out its terrorist activities

The Gulf summit, which was held in Riyadh yesterday, drew the features of moving forward in strengthening cooperation and unifying positions in various fields among the countries of the Cooperation Council for the Arab States of the Gulf, amid consensus on unity and the need to join efforts and strengthen the integration process to meet the major challenges in the region.

The delegation of the State of Kuwait in the 42nd session of the Supreme Council of the Gulf Cooperation Council, which was held at Diriyah Palace in Riyadh, was headed by the representative of His Highness the Amir Sheikh Nawaf Al-Ahmad, His Highness the Crown Prince Sheikh Mishaal Al-Ahmad, while the session was chaired by the Crown Prince, Deputy Prime Minister and Minister of Defense Prince Muhammad bin Salman.

The Secretary-General of the Gulf Cooperation Council, Dr. Nayef Al-Hajraf, also participated in the summit.

The final statement, issued after the summit, stressed the importance of coordinating positions among the GCC states in a way that preserves their interests and avoids regional and international conflicts.

The statement, which was read by Al-Hajraf, affirmed, “According to the contents of Article Two of the Mutual Defense Agreement, the member states of the Cooperation Council for the Arab States of the Gulf consider any attack on any of them to be an attack on them all, and any danger that threatens one of them is threatening them all.”

The statement also affirmed “what was stipulated in the mutual defense agreement regarding the commitment of member states to work collectively to confront all threats and challenges.”

It was agreed, according to the statement, “on principles and policies to develop strategic cooperation, development and economic integration of the GCC states, achieve the aspirations of their citizens, and stress the need to complete the elements of economic unity and the joint security and defense systems of the Gulf states.”

It was agreed on “the importance of concerted efforts to coordinate and integrate the foreign policies of the member states in order to crystallize a unified and effective foreign policy that serves the aspirations and aspirations of the peoples of the Gulf states and preserves their interests.”

The statement stressed, “the importance of following up on the achievement of the goals of the economic visions of the Gulf Cooperation Council countries to achieve economic diversification, and to maximize the benefit from economic potential.”

He also referred to the agreement on “developing the integration of road, train and communication networks” among the GCC states and coordinating efforts to combat “climate change, epidemics and diseases.”

Emphasizing the importance of enhancing collective action to face challenges, the leaders stressed strengthening the role of women and youth in the economy and business, implementing initiatives related to climate change, and the importance of pursuing economic visions and investment opportunities among the GCC states.

The final statement stressed the full and accurate implementation of the vision of the Custodian of the Two Holy Mosques, King Salman bin Abdulaziz, to achieve the highest levels of integration, keenness on unity, strength and cohesion of the GCC states, and their desire for more integration and interdependence in all fields.

The GCC states “stressed that they stand united in the face of any threat to any country,” noting the importance of preserving the Gulf gains and that the security of the GCC states is indivisible.

It reiterated the importance of maintaining the security and stability of the region, respecting the principles of sovereignty and non-interference in the internal affairs of countries, and rejecting interference in Arab affairs.

Condemning the continuation of the Iranian-backed Houthi militias threatening the security of Saudi Arabia and violating international humanitarian law, the GCC states affirmed the right of the Arab coalition in support of legitimacy to take all measures to deal with these terrorist threats.

The final statement reiterated the positions of the GCC states towards the centrality of the Palestinian cause and their support for the establishment of a Palestinian state with Jerusalem as its capital, guaranteeing the rights of refugees, and condemning Iran’s continued occupation of the three UAE islands.

Regarding the relationship with Iran, the final statement stressed the need for Tehran to adhere to the principles of good neighborliness, adherence to the foundations and principles based on United Nations charters, non-use or threat of force, respect for the sovereignty of states and non-interference in their internal affairs, expressing hope that the new Iranian administration will work to Adopting policies to reduce tension in the region.

Emphasizing the importance of dealing seriously and effectively with Iran’s nuclear program, it called on the GCC states to participate in any negotiations with Iran, given the paramount importance of this file to the security of the region.

On the Lebanese issue, the final statement called on Lebanon to carry out reforms and prevent “Hezbollah” from carrying out its terrorist activities.