Home Local News Informative Minister of Defense: History testifies to the excellence and superiority of Kuwaiti... 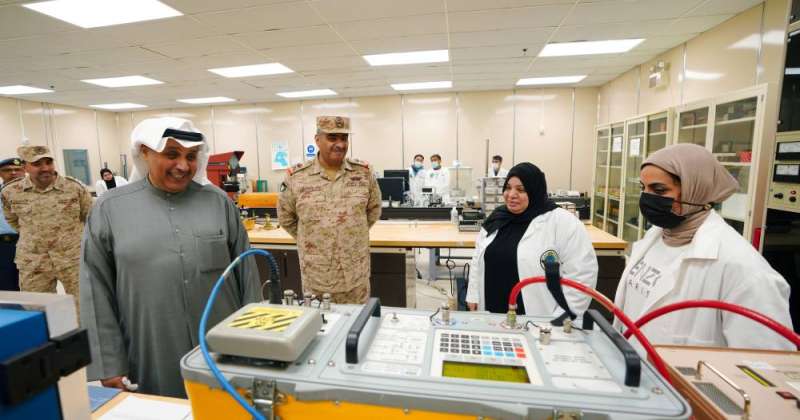 Deputy Prime Minister and Minister of Defense Sheikh Hamad Jaber Al-Ali affirmed that “history bears witness to the excellence and superiority of Kuwaiti women in various administrative and technical positions and disciplines,” on the sidelines of a visit he made to the calibration workshop of the Air Force Maintenance Complex, where he listened to an explanation given by the chief specialist engineer. (Electricity) Eng. Sawsan Ali Al-Seif about the role and technical tasks performed by the operator’s workers, including measurement and inspection of various devices, through the use of the latest tools and accurate equipment that conform to internationally approved standards.

Sheikh Hamad Jaber Al-Ali expressed his pride in the efforts of female workers from various technical disciplines in the calibration workshop, and their scientific competence and technical skill, capable of keeping pace with the latest advances in modern technology in the field of measurement and calibration, pointing out that “the Ministry of Defense is moving forward in Implementation of its plan aimed at achieving the principle of justice and equality stipulated in the Kuwaiti constitution, which has already been started by opening the registration door for women who wish to join the honor of military service according to the decisions organized in this regard. The “sisters of men” are making efforts to support and support their brothers in the Kuwaiti army.

Al-Ali affirmed the ministry’s keenness to harness all forms of support and support for all efforts that work to improve the level of performance, and contribute to saving waste and preserving public money. He expressed his thanks and appreciation to the workers in the calibration workshop, for their efforts and outstanding work that reflects the depth of their faith, loyalty and loyalty to their dear country, asking God Almighty to perpetuate the blessing of security, safety and stability for Kuwait under the wise leadership of His Highness the Amir, Supreme Commander of the Armed Forces and His Highness the Crown Prince. His Highness the Prime Minister.