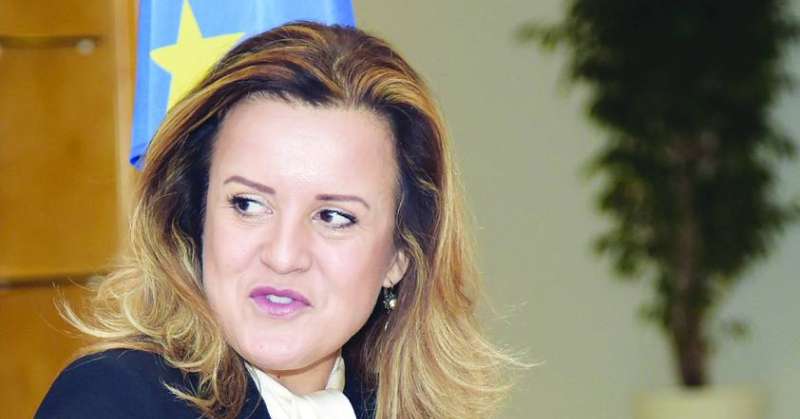 The French Ambassador to the country, Claire Le Fleischer, expressed her pride and pride in representing her country as an ambassador in Kuwait, explaining that she is lucky because this year marks the 60th anniversary of the start of friendship between the two countries, as these relations began on August 28, 1961, and France was at the forefront of countries that recognized the independence of the country. Kuwait.

In her first meeting with representatives of the local press after presenting her credentials, Le Fleischer announced her work plan as an ambassador to support and enhance bilateral cooperation between the two countries and to build on strong relations in the first place, pointing out that the priority is to support the strategic dialogue, which will be at the ministerial level for the first time. It is expected to take place at the end of January.

She explained that the strategic dialogue is filled with a rich and diverse agenda, where all aspects of bilateral relations will be discussed, in addition to new bilateral agreements that will be signed in the coming months.

She noted the fruitful parliamentary cooperation between Kuwait and France, explaining that Kuwait has a strong and distinguished parliament, revealing the visit of French parliamentarian Emilia Cravey to Kuwait yesterday evening, where he will discuss with National Assembly Speaker Marzouq Al-Ghanim ways to support and enhance bilateral cooperation.

Le Fleischer said that her country has had distinguished military cooperation relations with Kuwait since 1990, where more than 15,000 French soldiers from the “Daghett” battalion participated in the war to liberate Kuwait, pointing out that she will encourage bilateral cooperation, especially in the field of training and intelligence cooperation. .

And whether there is a visit by French Foreign Minister Jean-Yves Le Drian to Kuwait, she said that the intention is there, but the date of the visit has not been set yet.

She pointed out that her country has a fruitful and constructive interaction with Kuwait with regard to resolving the crises the region is going through, pointing out that Kuwait plays a distinguished and balanced role in supporting the stability of the region and establishing peace.

In response to a question about whether the French mediation had fruition in dealing with the Gulf-Lebanese crisis, she said: “There is no doubt that the situation in Lebanon is bad, as it is witnessing two major economic and political crises,” adding that “the collapse of Lebanon will reflect negatively on the region.”

French Ambassador Claire Le Fleischer confirmed that she was fortunate to meet His Highness the Crown Prince Sheikh Mishaal Al-Ahmad while presenting her credentials, explaining that the discussions with His Highness lasted 25 minutes, and the dialogue was comprehensive and purposeful on ways to support and strengthen bilateral relations between the two countries, noting that His Highness sent an invitation to President Emmanuel Macron to visit Kuwait.

She said: “During my last visit to Paris, I conveyed this desire to the French authorities, where it was very welcome, but no date has been set for the visit so far.”

Supporting Kuwait to join the Francophonie

The French ambassador urged Kuwaiti students to study in France, which enjoys the internationally acclaimed quality of its universities, pointing out that the language barrier is no longer an obstacle due to the presence of many study programs taught in English in French universities.

She indicated that the French Institute resumed its activity and opened its doors after a period of hiatus due to the “Corona” pandemic, stressing that her country wishes to support Kuwait in its plan to join the World Organization of the Francophonie.

With regard to the latest developments in travel procedures to France in light of the outbreak of the new mutant, she explained that the good news is that Kuwait is still among the countries of the Green List, but travelers to France must have documents proving that they have received two doses of vaccinations approved by the European Union, as well as Negative PCR smears 72 hours before travelling.