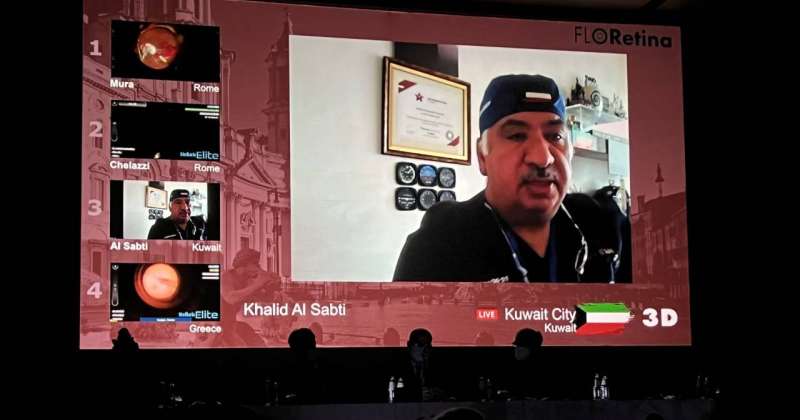 Today, Saturday, Kuwaiti ophthalmologist Dr. Khaled Al-Sabti performed two minute surgeries via live broadcast in front of an international conference on retinal diseases in Italy, in the first participation of its kind by a Gulf surgeon among the most prominent specialists in the world.

This took place at the (Floretina 2021) medical conference held at the Convention Center in Rome, where the Director of the Kuwait Specialized Eye Center and Consultant Ophthalmologist, Dr. Al-Sabti, was chosen among 25 surgeons from all over the world to present the latest technologies he developed in the treatment of the retina.

The fourth annual conference, hosted by Italy, was attended by 1,800 retinal surgeons from around the world, including from Kuwait, Dr.

In an exclusive statement to the Kuwait News Agency, Al-Sabti expressed his great pride in representing Kuwait “as the first Kuwaiti and Gulf surgeon chosen more than once to participate with this elite of senior specialists in a prestigious international scientific and educational forum” to present his “innovative” techniques with these two precise surgeries that were broadcast in direct interactive communication. with the participants.

He expressed his happiness and gratitude for the appreciation of the success that culminated in the two surgeries he performed with his staff, one of which was the “pseudo-macular hole” operation on a 73-year-old patient with retinal detachment, considering the appreciation and praise he received as a valuable testimony to medicine in Kuwait and the Gulf.

He stressed that choosing to present his surgical methods at this educational conference, which allows specialists of retinal surgery consultants in the world to keep pace with the latest and most successful surgical and treatment techniques, “is a source of pride for him as a surgeon and as a Kuwaiti.”

Al-Sabti said that he was honored to be a representative of his country, Kuwait and the Gulf states, in the first participation at this level in the “Floretina” international conference, which allows specialists around the year to keep pace with the “gold standard” in the areas of diagnosis and medical and surgical management of retinal diseases in order to enhance and improve therapeutic efficiency.

A real pride for Kuwait

And he considered that choosing Dr. Al-Sabti among an international elite to perform two precise surgeries and broadcast them directly in Rome from Kuwait with other capitals “is a real pride for Kuwait,” especially since one of the two cases is rare and necessitated “bridging a hole in the optic nerve that leads to infiltration under the retina with a technique developed for the first time using fibers.” normal retinal tissue.

From accompaniment to innovation

For his part, Dr. Al-Foudari said that participation in this international specialized conference stems from the keenness of Kuwaiti doctors, especially ophthalmologists, to keep abreast of the latest surgical devices and medicines used in eye surgery, as well as to learn about the new technologies in those surgeries, which is reflected on the health of the Kuwaiti citizen.

He added that hosting the Kuwaiti surgeon, Dr. Al-Sabti, in this conference, and using his expertise, “is evidence that the Kuwaiti doctor has advanced from the stage of accompaniment to the stage of developing and presenting special techniques for the world to benefit from, which is what happened as Dr. Al-Sabti’s techniques were highly appreciated and recommended as effective surgical procedures.”

The (Florentia) conference, whose first activities were launched in Florence in 2017, is considered one of the most important scientific conferences and is concerned with keeping pace with the latest sciences, technologies, equipment and surgical and therapeutic equipment in the field of retinal diseases.