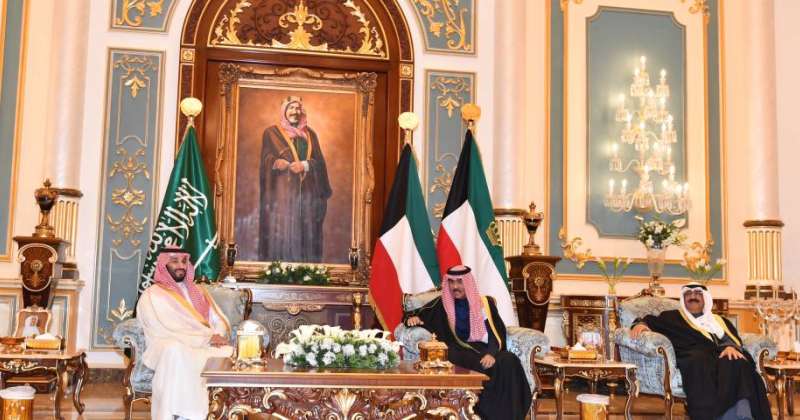 Emphasizing the contents of the “Al-Ula” declaration and unifying political positions
Strengthening defense, security and economic cooperation
Continuing cooperation in the field of energy and enhancing the stability of the global oil market
– Coordination on the implementation of the Green Middle East Initiative
The necessity of carrying out comprehensive reforms to ensure that Lebanon can overcome its crises
Dealing seriously and effectively with Iran’s nuclear and missile file
Finding a comprehensive political solution to the Yemeni crisis based on the Gulf initiative

Kuwait and Saudi Arabia issued a joint statement at the conclusion of the visit of Saudi Crown Prince Mohammed bin Salman to Kuwait. The statement stressed the importance of implementing the contents of the Al-Ula statement, and unifying political positions.
Advertisement

The statement touched on the oil file, the divided region and the submerged region, stressing the advancement of cooperation in all fields to a level that reflects the depth and rootedness of the historical brotherly relations between the two countries.

The two sides commended the establishment of the Saudi-Kuwaiti Coordination Council, which comes from the desire of the leaderships of the two brotherly countries to raise cooperation in all fields to a level that reflects the depth and rootedness of historical brotherly relations. Relationships to the prospects of strategic partnership.

The two sides praised the close cooperation between them in the field of energy and the successful efforts of the OPEC Plus countries aimed at strengthening and stabilizing the global oil market. They also stressed the importance of continuing this cooperation and the need for all participating countries to adhere to the OPEC Plus agreement.

They pointed out that coordination is currently underway between companies operating in the divided and submerged area adjacent to it regarding the implementation of the terms of the memorandum of understanding, and that work is continuing to increase the level of production in both the Khafji operations and the joint Wafra operations.

The two sides agreed to enhance ways of cooperation on international climate policies, to cooperate in implementing the Green Middle East initiative launched by His Royal Highness Prince Mohammed bin Salman, and to cooperate in implementing the concept of a circular carbon economy to contribute to addressing carbon emissions in an economically sustainable manner, in addition to cooperation in the fields of energy and energy efficiency. Renewable energy and the development of its technologies and projects for its contribution to the sustainability of energy supplies globally and the importance of increasing cooperation to enhance the two countries’ benefit from electrical interconnection and commercial exchange of electrical energy and to maximize the use of local content in energy sector projects.

They also affirmed their determination to move forward to enhance economic, commercial and investment cooperation in the public and private sectors, establish joint economic projects in the two countries, and raise the level of trade exchange between them in a way that achieves the aspirations and aspirations of the two brotherly peoples.

The two sides stressed the importance of continuing to strengthen the existing cooperation in the financial fields, exchanging expertise and best practices and experiences in implementing economic reforms, diversifying sources of income, developing efficiency and transparency of public finances, and benefiting from the experiences of the two countries in this field.

They stressed the strengthening of cooperation in various fields such as health, tourism, food security and human development, especially in the youth and women’s empowerment sectors, as well as cooperation in the areas of digital transformation and cybersecurity.

The two sides also reviewed the developments of the regional and international situations and affirmed the coordination of their positions in a way that serves their interests and supports and enhances security and stability in the region and the world.

In this regard, the two sides affirm their full support for all the legitimate rights of the Palestinian people, foremost of which is their right to establish an independent Palestinian state with East Jerusalem as its capital on the 1967 borders, in accordance with the Arab Peace Initiative, the principle of the two-state solution and relevant international legitimacy resolutions in a manner that achieves the aspirations of the brotherly Palestinian people.

On the Yemeni issue, the two sides affirmed the congruence of their views on continuing their efforts to find a comprehensive political solution to the Yemeni crisis based on the Gulf initiative and its executive mechanism, the outcomes of the comprehensive Yemeni national dialogue, UN Security Council Resolution No. 2216 and the initiative of the Kingdom of Saudi Arabia to end the Yemeni crisis, and expressed their support for the efforts of the Secretary-General The General Assembly of the United Nations for Yemen and the initiatives of friendly countries and support for efforts exerted to alleviate the human suffering of the brotherly Yemeni people and condemned the Houthi militia’s targeting of airports, civilian objects and vital installations in the Kingdom and its threat to international waterways. and international peace.

On the Lebanese issue, the two sides stress the need to carry out comprehensive reforms to ensure that Lebanon overcomes its crises and confines arms to the legitimate state institutions in accordance with what was stated in Security Council Resolutions No. 1559 and 1701, and that Lebanon will not be a launching pad for any terrorist acts and an incubator for organizations and groups that target the security and stability of the region and a source of the drug scourge that threatens the safety of communities in the region and the world.

The two sides expressed their full support for the security and stability of brotherly Iraq and welcomed the success of the electoral process in Iraq, expressing their wishes for the formation of an Iraqi government that will continue to work for the security and stability of Iraq and its development, eliminating terrorism and stopping foreign interference in its internal affairs.

The two sides also welcomed the understandings reached by the parties to the transitional phase in Sudan, and affirmed their continued support for everything that would achieve security and stability in Sudan, and their wishes for Sudan and its brotherly people stability and prosperity.

They also stressed the importance of cooperation and dealing seriously and effectively with Iran’s nuclear and missile file with all its components and repercussions, stressing their common position in this regard and their call to abide by Security Council Resolution No. Agreements and arrangements to ensure respect for the sovereignty of countries in the region and the principle of good neighborliness, and to enhance and maintain regional and international security and stability.

The two sides also stress that a political solution is the only solution to the Syrian crisis, and in this regard they support the efforts of the United Nations and its Special Envoy to implement the relevant international resolutions, foremost of which are Security Council Resolution No. 2254 and the Geneva 1 statement, and to stop regional interventions and projects that threaten the unity, sovereignty and identity of Syria.

With regard to Afghanistan, the two sides stressed the need to support security and stability in Afghanistan and not allow the existence of safe havens for terrorists and extremists in it. The two sides condemned any acts aimed at recruiting Afghan refugees in the various conflict areas and expressed the importance of supporting relief efforts and humanitarian work in Afghanistan. In this regard, the Kuwaiti side valued the Kingdom’s invitation An extraordinary ministerial meeting of the Organization of Islamic Cooperation countries to discuss the situation in Afghanistan, which will be held in the Islamic Republic of Pakistan on December 19, 2021 AD.

On the Libyan issue, the two sides express their welcome to the Libyan and UN efforts to support the implementation of the agreed political entitlement to enable the brotherly Libyan people to achieve their aspirations for unity, peace, stability and prosperity in implementation of Security Council Resolution No. 2750.

At the conclusion of the visit, His Royal Highness Prince Muhammad bin Salman bin Abdulaziz Al Saud, Crown Prince, Deputy Prime Minister and Minister of Defense of the Kingdom of Saudi Arabia, expressed his deep thanks to His Highness Sheikh Nawaf Al-Ahmad Al-Jaber Al-Sabah, Emir of the State of Kuwait, and to His Highness Sheikh Mishaal Al-Ahmad Al-Jaber Al-Sabah, Crown Prince of the State of Kuwait For what he and the accompanying delegation received from the warm reception and hospitality.