Home Local News Informative Integrity: The Code of Conduct does not aim at restriction 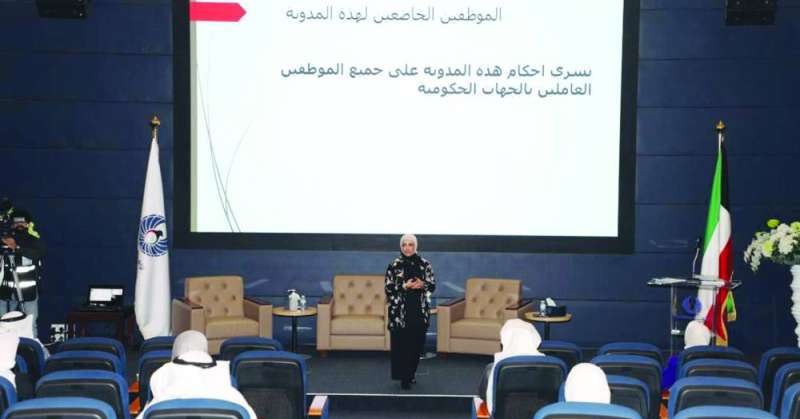 The Assistant Secretary-General for Prevention at the Public Anti-Corruption Authority, Eng. Abrar Al-Hammad, affirmed that “the codes of professional conduct do not create obligations or rights out of thin air. Such as the civil service law and system, the penal law and the complementary laws, including the law regulating the right to access, the law for protecting public funds and the anti-corruption law.

Al-Hammad stressed to “Al-Rai” that the code “represents one of the most important tools and measures that do not aim to restrict employees, but rather protect them and distance them from violating the requirements of job duty and falling into corruption, and thus protecting society as a whole from the risks of functional and financial corruption.”

She added, during a workshop in cooperation with the Civil Service Commission, which was held yesterday for a group of supervisory occupants in government agencies, that “the code of conduct is an important part of Kuwait’s strategy to enhance integrity and combat corruption,” noting that it “represents a set of ethical and humanitarian principles and rules for the occupants.” The public job, and includes standards that define for employees the values ​​and behaviors that should be followed while performing their work in the authority more effectively in accordance with the laws and regulations,” stressing the importance of the role played by the supervisory authorities in state institutions to spread awareness, by circulating these blogs, which will contribute to raising the efficiency of public services, their employees and recipients. Both.

She indicated that “the aim of holding courses related to the Code of Functional Conduct does not stop at defining it and stating its importance only, but also goes beyond the limits of identifying its shortcomings and shortcomings through the discussions taking place, and the views presented by the attendees and stakeholders about it during those courses.” .