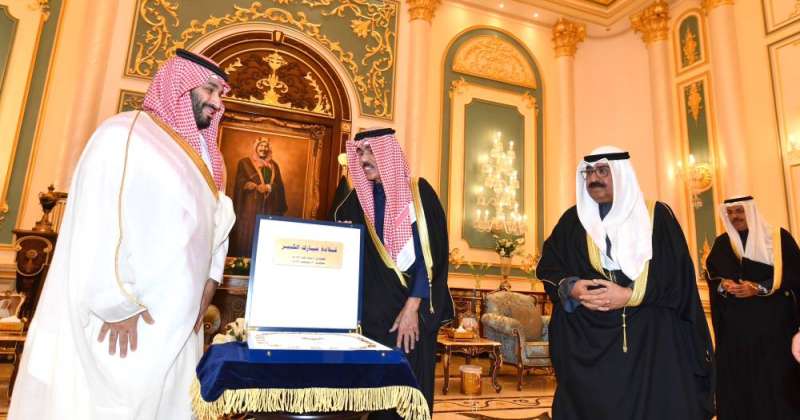 In honor of the great guest of the state, His Highness the Emir of the country, may God protect him and his patronage, bestowed his brother, His Royal Highness Prince Muhammad bin Salman bin Abdulaziz Al Saud, the Mubarak Al-Kabeer Medal and the Order of Kuwait, in appreciation of His Highness and the distinguished achievements and efforts made by the sisterly Kingdom of Saudi Arabia and its honorable people for the sake of stability and security The Kingdom advances and strengthens the bonds of brotherhood between the two brotherly countries and the brotherly ties between the countries of the Cooperation Council for the Arab States of the Gulf.

His Excellency the Minister of Amiri Diwan Affairs Sheikh Muhammad Abdullah Al-Mubarak Al-Sabah stated that during the meeting, they reviewed the historical and deep-rooted fraternal relations that bind the two noble families and the two brotherly countries and peoples in light of the ties of kinship and brotherhood that unite them and ways to enhance joint cooperation between them in various fields in a manner that serves their interests and express Expressing the common joy of this fraternal visit of the great guest of the state, and the prospects for Gulf cooperation to achieve common interests and aspirations of the Gulf peoples were reviewed.

The meeting prevailed in a cordial atmosphere, reflecting the distinguished spirit of brotherhood between the two brotherly countries and the common desire for more cooperation and coordination at various levels.

His Royal Highness Prince Mohammed bin Salman, Crown Prince, Deputy Prime Minister and Minister of Defense of the sisterly Kingdom of Saudi Arabia, and the official delegation accompanying His Highness arrived this evening on an official visit to the country.