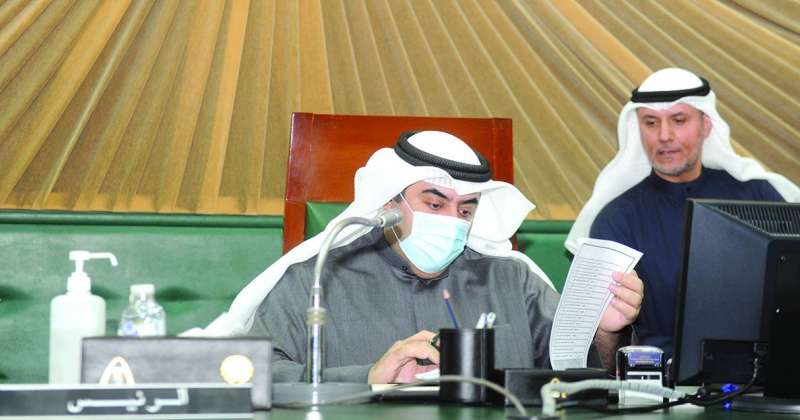 Mishaal Al-Hamadan: People who deliberately delay the building regulations until they make exceptions
– Changing the activity of a poultry company’s location in Dajeej… and Al Randi warns against turning warehouses into trade fairs
Referring the draft regulation on public hygiene and waste transport to the Legal and Financial Committee for discussion

In response to the events of the previous Municipal Council session, which was lifted due to the withdrawal of some members and the loss of its quorum, which led to the failure to discuss the expansion project of Mubarak Al-Kabeer Port, a member of the Council, Maha Al-Baghli, requested to include the request for discussion again, in the council’s session yesterday, but her request was rejected after 9 members voted against it. Out of the audience, amid questions about the real reasons behind this disruption.

Al-Baghli explained to “Al-Rai” on the sidelines of the session, which was held under the chairmanship of Osama Al-Otaibi, that she asked to discuss the expansion again, “because the project is very important, but after the members voted on it, it was dropped,” noting that “the transaction is disrupted in the technical committee for unknown reasons, and once the I ask for it to be included in the main session, but it is rejected, and today (yesterday) the members returned the ball again with refusal.”

She added, “The reason announced by them is that why the Council of Ministers does not specify the implementing agency, and I reply to them that this matter is not within the competence of the Municipal Council, so why this particular treatment?”

In the course of the session, the Council, after a lengthy discussion among the members, approved the request of the Ministry of Finance to change the site’s activity belonging to a poultry company in the Dajeej area, as the Council rejected by a majority of 8 members against 7 the request of the member Dr. Hassan Kamal regarding keeping the transaction on the agenda, with Requesting the executive body to provide the council with a report that includes a disclosure of the site’s current query.

Member Abdulsalam Al-Randi said that “if the door is not opened, it will be taken off,” referring to his rejection of the request, especially since the stores in this way will turn into trade fairs.

The member, Mishaal Al-Hamadan, said, “An official in the State Property Department confirmed that any activity can be practiced in the warehouses, and the legal department says the opposite of this (here all laws have been broken).”

The Council approved the request of the General Sports Authority to permanently allocate the location of the Jaber Al-Ahmad Circuit in the Al-Dajeej area for the Kuwait Automobile and Motorcycle Club, with the approval of 8 and the rejection of 6. him, and thus transforming the circuit into a permanent one does not conflict with the establishment of the metro.”

The member, Muhammad Al-Raqib, confirmed that “the metro is within the jurisdiction of the Roads Authority, and in light of the approvals and technical opinion, it was approved.”

Regarding the draft regulation of public cleanliness and waste transport, Maha Al-Baghli refused to accept it, as it did not include any clear changes, and the change rate did not exceed 5% since the beginning of the council to this day, stressing that “the recommendations that were made in the previous period did not find anything.” .

For his part, Al Randi said that “the statements of the executive body in this matter contradict reality, especially since it is surprising that the members’ proposals were not added to the new regulation (environmentally friendly bags).”

Member Mishaal Al-Hamadan commented, “The Kuwaiti people will hold us accountable if the regulation is approved in this way.”

Member Hamad Al-Medlej demanded that the draft be referred to the Legal and Financial Committee for discussion, supporting the observations and negatives expressed by the members in the draft regulation.

The representative of the Legal Department confirmed that the Department does not express a legal opinion until after reviewing all the laws, in addition to making sure that they do not conflict with any regulation.

1 – The request of the Ministry of Awqaf and Islamic Affairs to allocate a mosque site in Mubarak Al-Kabeer area, block 2.

2 – The Ministry of Social Affairs and Labor requested converting the rooftop car sites of the Central Market No. 1 in the Sabah Al-Salem area, Block No. 9, into multi-storey car parks.

3- The proposal of the member, Dr. Ali bin Sayer, regarding the establishment of a dispensary in the Al-Qusour area to serve the people of the area.

1 – Determine the sites for the accumulation of accumulated sand.

2 – Allocating a site in each sector to establish a catering branch with an area of ​​no less than 400 square meters in the city of Sabah Al-Ahmad.

3- Urgency in the services of the Al-Khairan residential area.

5 – Creating a way out for the Dasma Cooperative Society suburb center position.

1 – The Environment Public Authority requested the construction of rock and cement barriers to protect coastal installations from the beach of the village of Messila to the shore of the Sabah Al-Salem bridge in the Messila area, plots 6 and 7, until a representative of the authority is summoned.

A consensus on Al-Baghli’s proposal for “nursery homes”

The council agreed, unanimously, to refer the proposal of the member, Engineer Maha Al-Baghli, to the executive body to address the Ministry of Affairs regarding the amendment of Article 3 of Law 22 of 2014, regarding nurseries, to add an article in the building regulations, obligating governmental and private institutions and agencies, which increases the number of female workers It employs 50 female workers, or the number of its employees exceeds 200, by establishing nurseries.