Home Local News Informative “Engineering and Petroleum” opens the 40th Design Exhibition with the support of... 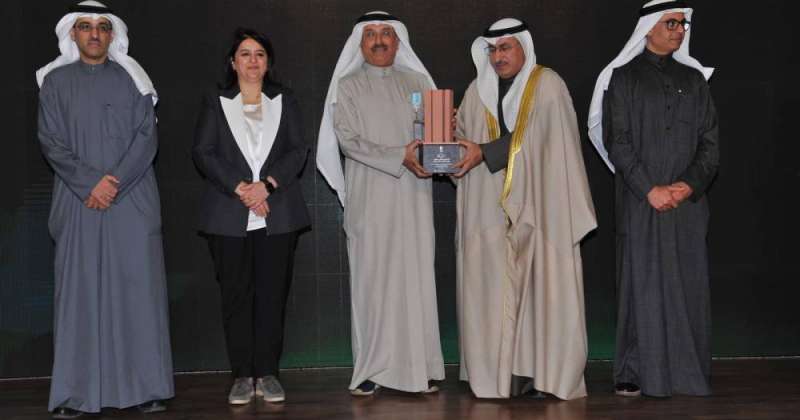 – Al-Fares: The exhibition contained projects that reflect the competencies and constructive energies of our sons and daughters.
Zainal: The participating constellation is a medal that the youth of this country are proud of

Under the patronage of the Prime Minister, His Highness Sheikh Sabah Al-Khaled, and in the presence of Dr. Muhammad Abdul Latif Al-Faris, Minister of Oil and Minister of Higher Education, and Dr. Rana Al-Faris, Minister of Public Works and Minister of State for Communications and Information Technology Affairs, with the support of the Kuwait Foundation for the Advancement of Sciences, organized the College of Engineering and Petroleum at Kuwait University, Engineering Design Exhibition 40, on the northern campus of the College of Engineering and Petroleum in Sabah Al-Salem University City.

For the first time, the Engineering Design Exhibition will be held in Sabah Al-Salem University City, with the participation of 102 projects from various scientific departments of the College of Engineering and Petroleum.

On this occasion, the representative of His Highness the Prime Minister at the opening of the exhibition, Minister of Oil and Minister of Higher Education, Dr. Muhammad Al-Faris, expressed his happiness at the opening and attendance of the 40th Engineering Design Exhibition, representing the Prime Minister, His Highness Sheikh Sabah Al-Khaled, which includes a number of engineering projects under the dome of the College of Engineering and Petroleum. He indicated that this exhibition is a beacon and a stimulating environment for a culture of creativity and innovation, and to highlight the skills of male and female students in the field of engineering design.

He pointed out that the exhibition contained engineering projects from various engineering disciplines in the College of Engineering and Petroleum, with creative and innovative thinking, serving society and humanity for a sustainable life, which undoubtedly reflects the extent to which our sons and daughters, the engineers of the future, possess constructive and productive competencies and energies. With the ability to be creative, and this is what makes us proud of them, calling for such projects to have an extension on the ground, and to be the beginning of opening new and expanding horizons for our sons and female engineers in the future, in order to engage and compete in the labor market and contribute to advancing the wheel of development and strengthening the Kuwait 2035 plan. .

Dr. Al-Fares praised the active role of his sisters and brothers, members of the academic staff, for the distinguished efforts they make in the field of university education, through their optimal investment in human capital and the development of the skills of our sons, engineers and engineers in all engineering disciplines. Because of the great effort they do, as it represents the extraction of scientific study and the accumulation of knowledge on both the theoretical and applied levels during the years of university study and its translation into innovative projects in the hands of our sons engineers.

Al-Faris added that the College of Engineering and Petroleum is a factory for engineering ideas and innovations that address many local and international problems in the hands of male and female students under the supervision of a distinguished elite of professors with expertise and specialization in the college, thanking everyone for this tangible effort and thanks to the organizers of this annual exhibition from the authority The academic, scientific and administrative staff at the college, wishing everyone success, and that this exhibition continue to feed the local market with engineering projects and patents, which will undoubtedly contribute with the hands of its children in building, progressing and prospering the country.

In turn, the Acting Vice President of the University for Planning, Dr. Muhammad Zainal, confirmed that the holding of the engineering design exhibition comes after the return of the traditional study after its suspension due to the repercussions of the Corona virus, and that it is the first exhibition to be held on the campus of Sabah Al-Salem University City, and since investing in human resources gives us several responsibilities, the most important of which are It lies in supporting the state’s directions in creating creative human capital that keeps pace with development challenges, indicating that Kuwait University has been keen, through several different faculties, to hone the skills and experiences of our students, specifically to enrich practical skills that prepare them to excel in the competitive environment and the labor market in Kuwait and abroad. Kuwait Accordingly, this exhibition comes to achieve balanced integration to raise the academic education system and curricula for applied experience and engineering design skills, an event that was and still distinguishes Kuwait University from other educational institutions.

Dr. Zainal pointed out that the distinguished constellation participating in this exhibition is a badge of pride for the youth of this country, whose efforts continued throughout their years of study at the College of Engineering and Petroleum to see it today on the ground in projects that chart a successful professional future and a way to open up horizons of creativity and excellence at a high level of Professional and professional, stressing that these projects will enhance the participants’ abilities to contribute effectively to achieving the visions and aspirations of the State of Kuwait for a better future.

He expressed his thanks to all those who contributed to the sponsorship, organization and implementation of this exhibition, which will fix the engineers of Kuwait University in field experiences and help them to actively participate in realizing the visions of the State of Kuwait to build the future. For the success of Kuwait University’s strategic partnerships with the various sectors of the state to prepare creative outputs capable of effectively contributing in the field of work, whether locally, regionally or internationally.

In conclusion, Dr. Zainal explained the significant impact that these initiatives may have in enhancing the world rankings of Kuwait University, praising those initiatives, and urging other colleges to compete with one another so that such activities become part of their usual work culture.

For his part, the Director of the Engineering Training Center and Graduates, Dr. Duaij Al-Rukaibi, expressed his pride in the presence of the Minister of Oil and Higher Education, Dr. Muhammad Al-Faris, representing His Highness the Prime Minister, as well as the Minister of Works, Dr. Rana Al-Faris, pointing to the importance of the Engineering Design Exhibition to build a generation of engineers to meet the greatest challenges to achieving Kuwait’s vision. 2035.

Al-Rukaibi stated that during the period between 2001 and 2021, 2,400 projects were reached and 10,000 students graduated from the College of Engineering and Petroleum, thanking the Kuwait Foundation for the Advancement of Sciences for continuing to participate since the first engineering design exhibition to this day, and he also thanked the sponsors for this exhibition.

For his part, the Director of the Innovation Department at the Sabah Al-Ahmad Center for Giftedness and Creativity, Eng. Abdullah Al-Jadaan, representatives of the Kuwait Foundation for the Advancement of Sciences, stated that they are always keen to support this exhibition annually and attend to see the wonderful ideas of engineers in their graduation projects, noting that their presence is not limited to financial support or moral, but even to attract some ideas for these projects to be incubated through the Sabah Al-Ahmad Center by issuing a patent certificate or assisting in technological development according to the available human resources in the center.

It is worth mentioning that the Engineering Design Exhibition is considered one of the largest exhibitions held by the College of Engineering and Petroleum at Kuwait University since the establishment of the college in 1975.