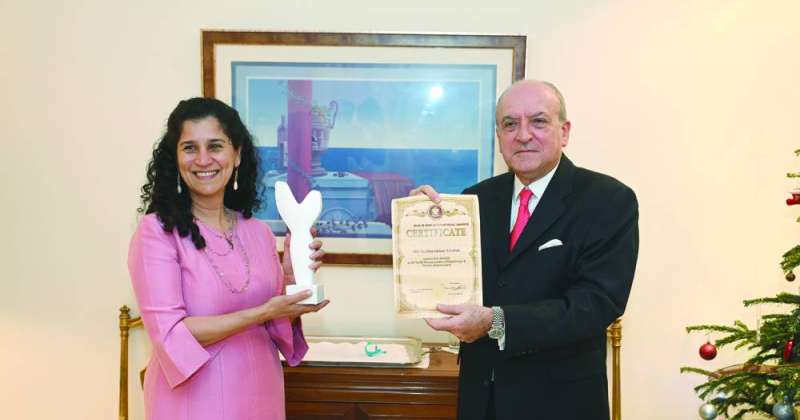 The Greek ambassador to the country, Konstantinos Bibirigos, confirmed that his country’s relations with the Arab region as a whole extend for more than 3000 years, as traces of the Greek civilization were found in various western regions, including Alexandria and Failaka Island.

In a statement to reporters on the sidelines of the honoring ceremony organized by the Greek embassy for Sheikha Intisar Salem Al-Ali in appreciation of her contributions and efforts in volunteer work in the Arab world, he added that the embassy issued about 4,000 visas after the end of the “Corona” pandemic during the past three months, including 3,000 visas in Kuwait and 1,000 from Bahrain. .

He revealed that his country was the first European country that opened its doors to receive tourists from different countries of the world, noting that the conditions for entry to his country are fixed and have not changed, which is the vaccination of two doses approved by the European Union or a PCR examination 72 hours before arrival, whether for those who are vaccinated or not, and it is not required to obtain On the third dose.

On the occasion, the ambassador said: “Some Greek associations working in the humanitarian field decided to award an honorary prize in appreciation of Sheikha Intisar’s efforts in the voluntary humanitarian field two years ago, but the conditions of the pandemic prevented that, so the honor was postponed to the date of this celebration.”

For her part, Al-Ali expressed her happiness and pride in this honor, noting that the work she does serve the community, explaining that this honor symbolizes the victory of women, and that she is now working in coordination with the Public Authority for Agriculture, the British Embassy and the United Nations Development Program on how to get rid of plastic .

She added, “There is a lack of environmental awareness, and we seek to strengthen it in society with positive things that preserve the environment.”