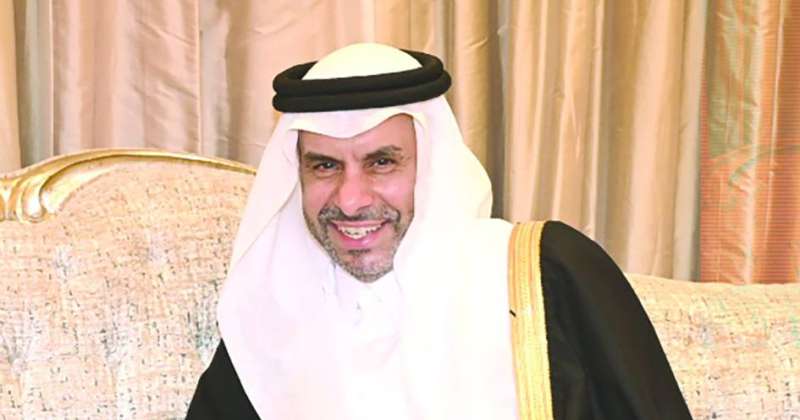 We appreciate the sincere efforts that were crowned with success, initiated by the late Sheikh Sabah Al-Ahmad and completed by His Highness the Emir to resolve the Gulf crisis.
– We congratulate the leadership of Kuwait on the results of the national dialogue culminating in creating the atmosphere for unifying the national ranks and strengthening the cooperation of the two authorities
– The lofty directives will remain a beacon to follow in doing our best for everything that is beneficial and good for both countries.
Qatar has made it a priority to build man, fortify him with knowledge, and provide him with the weapons of science and the tools of the age

The Qatari ambassador to Kuwait, Ali bin Abdullah Al Mahmoud, said that the firm and solid brotherly relationship between Qatar and Kuwait and their two brotherly peoples has been proven by days and facts through honorable positions recorded by history with an ink of light.

Al Mahmoud added in a speech on the occasion of his country’s National Day, which Qatar celebrates this year under the slogan “The Grandfathers’ Farms Are A Trust” that “the lofty directives to do our best for everything that is beneficial and good for the two countries will remain a beacon to follow in working to promote and strengthen these good relations in all fields.” .

He praised the sincere efforts initiated by the late Emir of Kuwait Sheikh Sabah Al-Ahmad and completed by His Highness Emir Sheikh Nawaf to resolve the Gulf crisis until it was crowned with success in the (Al-Ula summit) and culminated in fruitful results that achieved Gulf reconciliation, ensuring security and stability for the Gulf Cooperation Council countries and the entire region.

He expressed his sincere congratulations to the Kuwaiti political leadership on the results and outcomes of the national dialogue that was held recently under the lofty directives of His Highness the Emir, which culminated in creating the atmosphere to unify the national ranks and enhance cooperation between the executive and legislative authorities to achieve the higher interest of the country and support political stability in it.

He said that the institutions of the legislative, executive and judicial authorities in his country were completed after His Highness the Emir of Qatar, Sheikh Tamim bin Hamad Al Thani, included under his generous patronage on the 26th of last October, the opening of the first elected legislative council in the history of Qatar after free and fair elections that embodied the Qatari people’s keenness to carry out their national duty and won The praise and admiration of brotherly and friendly countries.

Al Mahmoud affirmed the Qatari constitution’s keenness to establish the principles of democracy and consultation by providing all guarantees and freedoms for the citizen for a dignified life based on freedom, justice, equality and equal opportunities at work and the right to peaceful expression of opinion.

He explained that the developed countries are interested in building the human being as a solid base upon which all other aspects of progress are based. Therefore, the State of Qatar has made it a priority to build the human in mind and body, fortify him with knowledge, and provide him with the weapon of science and the tools of the age in order to prepare a promising future generation. Therefore, the development goals of Qatar Vision 2030 revolve around building the nation and the citizen.

He said that his country is about to complete the necessary preparations to host the World Cup (Qatar 2022) at the end of next year in terms of infrastructure facilities and other required preparations, and many accompanying social and cultural projects have been completed.

He praised the strict precautionary and preventive measures taken by his country in containing the (Corona) pandemic and minimizing its effects, and it was one of the few countries that overcame this ordeal, thanks to the success achieved by its health institutions.

On this occasion, he recalled the history of the fathers and grandfathers who consolidated the foundations of the nation and raised its banner high in the sky of pride and dignity to continue the process of building the nation with the help of its loyal sons for a brighter and more prosperous future in order to preserve the legacy of the founders.

Al Mahmoud extended his warmest congratulations and blessings to His Highness, the Emir of the State of Qatar, Sheikh Tamim bin Hamad Al Thani, and the Qatari government and people on this national occasion.

Al Mahmoud said that the developed countries are interested in building the human being as a solid base on which all other aspects of progress are based. Therefore, the State of Qatar has made it a priority to build the human in mind and body, fortify him with knowledge, and provide him with the weapon of science and modern tools in order to prepare a promising future generation. Therefore, the development goals in Qatar Vision 2030 revolve around Building the nation and the citizen.

In the field of human rights, the Qatari constitution was keen to establish the principles of democracy and consultation by providing all guarantees and freedoms for the citizen for a dignified life based on freedom, justice, equality, equal opportunities at work and the right to peaceful expression of opinion.

In the economic sphere, during the past three decades, Qatar achieved a major leap in various fields, achieved advanced positions in all indicators, as certified by international institutions, and occupied a prominent position in global competitiveness.

The effects that occurred on the global economy during the Corona crisis have cast a shadow on the Qatari economy, but the measures and economic stimulus packages taken by the state contributed to the resilience of the Qatari economy.

In the third quarter of this year, the general budget achieved a surplus for the first time since the Corona pandemic, thanks to the rise in oil revenues and the increase in gas prices.

In the field of food security, Qatar has made great achievements in self-sufficiency.

In economic diversification, the necessary legislative amendments have been introduced to facilitate commercial transactions, enhance competition and support the competitiveness of national products. In the energy sector, the name change of Qatar Petroleum Company to Qatar Energy comes to keep pace with the shift towards clean and renewable energy.

The ambassador mentioned that education is the mainstay of human development, and the State of Qatar pays special attention to education in all its stages, as Qatar ranked first in the Arab world and fourth globally in the education quality index issued by the World Economic Forum in Davos for the year 2021. This interest was accompanied by the opening of branches of major universities The world has a good reputation and a high position in the fields of science, technology and scientific research, to be a tributary to the labor market with competencies that are not inferior in level to the best global competencies, in addition to interrogating international expertise for the benefit of the people of the country to lead the march of the future.

I would like to point out here to the great role played by the Qatar Foundation for Education, Science and Community Development in this context, which has been providing its services to Qataris by supporting and activating education, science, research and community development programmes.

Al Mahmoud pointed out that the health sector in Qatar has witnessed, in recent years, a great renaissance and qualitative leaps on more than one level, in implementation of the National Health Strategy in the Qatar National Vision 2030, as Qatar is ranked globally among the developed countries in providing integrated health care comparable to the best health systems. In the world.

Qatar was able to develop a comprehensive health care system that provides its services in accordance with the highest levels of quality and international standards through public and private health institutions that follow a national health policy that monitors the economic, social, administrative and technical aspects, in addition to building national cadres capable of providing the best health services.

The Qatari ambassador to Kuwait explained that His Highness Sheikh Tamim bin Hamad Al Thani, the Emir of the country, inaugurated on the thirtieth of last November the tenth session of the “Arab Cup Qatar 2021” after nine years of stopping and for the first time under the umbrella of the International Football Association “FIFA”, in A joyful ceremony that dazzled the world in terms of organization and capabilities, and in the end it will be a mini-rehearsal for the World Cup that Qatar will host at the end of 2022 for the first time in the Middle East and the Arab world.

As our country looks forward to hosting the 2022 World Cup at the end of next year, it is on the verge of completing the necessary preparations for this major event in terms of infrastructure facilities and other required preparations, and many accompanying social and cultural projects have been completed, as he said. HH The Emir in front of the Shura Council: “This tournament is a great occasion not only to enhance the state’s position globally, enhance communication and cooperation between peoples, and demonstrate Qatar’s organizational energies and advanced infrastructure, but also to demonstrate the openness and tolerance of the hospitable Qatari people, and to show the true bright face of the peoples of the Gulf and Arabs in general. ».