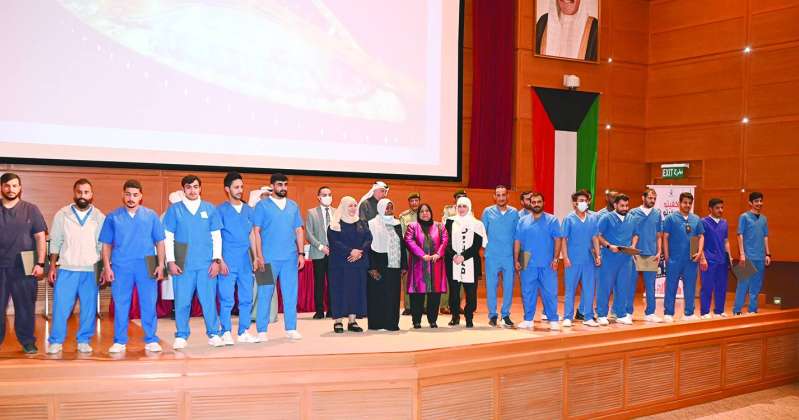 The Director of the Structural Training Institute and the Director of the Nursing Institute, deputizing Abdulaziz Al-Ruwaih, confirmed that the Nursing Institute was and still is an essential tributary to meet the needs of the health labor market in the country and provide it with trained cadres in the field of nursing and its various services, expressing his pride and pride in particular and all the Authority’s employees in general in the constellation of volunteer students of the Institute. Those who spared no effort in responding to the nation’s call during the COVID-19 pandemic by being on the front lines, challenging them and overcoming all the difficulties that vanished in front of their insistence on completing their volunteer tasks to the fullest, setting the finest examples of humanity on the land of this dear country, praising their national and voluntary role that Words cannot describe it, extending his thanks to all those in charge of this voluntary activity, including trainers, supervisors, and everyone who contributed to the realization of this great humanitarian work.

This came during the celebration of the Nursing Institute of the “Applied Authority” marking the 59th anniversary of its establishment, in the presence of the official spokesman for the Ministry of Health, Dr. Abdullah Al-Sanad, Director of the Public Health Department at the Ministry, Dr. Fahad Al-Ghamlas, and Director of the Training Directorate of the National Guard Colonel Rashid Salem, in addition to a number of The institute’s employees are on the stage of the Higher Institute of Communications and Navigation – Technological Park – Shuwaikh.

In turn, Al-Sanad confirmed that the students of the Nursing Institute and the College of Nursing in the authority had clear support for the health system in the country during the Covid 19 pandemic, adding that this celebration coincides with the completion of the implementation of the Cabinet decision held on May 3, 2020, during which the recommendations of the committee were reviewed. Ministerial emergencies and recommendations of the Ministry of Health regarding the use of male and female students, to be side by side with their brothers in the medical professions to confront this pandemic, praising all the efforts and facilities provided by the authority’s administration to serve the health system in the country.

He praised all those who contributed to volunteering in vaccination centers and swabs and working in health institutions from nurses during the pandemic, noting that every place where health care is provided, globally and locally, is not without the presence of one or more of the heroes of the nursing staff.

During the ceremony, a documentary film was shown dealing with the institute’s career since its inception and the achievements it has achieved during it, and another documentary film about the Covid-19 pandemic and documentary flashes that shed light on the role of the institute and its volunteers and their efforts in addressing this pandemic through their presence in vaccination centers, whether at Jaber Bridge or in the exhibition grounds In Mishref area.

At the conclusion of the ceremony, Al-Ruwaih, accompanied by Al-Sanad and the Director of the Higher Institute of Communications and Navigation, honored the male and female volunteers, the technical and administrative supervisors participating in the vaccination centers and the volunteers at work during the Corona pandemic. Snapshots and views