Home Local News Informative A huge turnout for “promotional”… after the first infection with “Omicron” was... 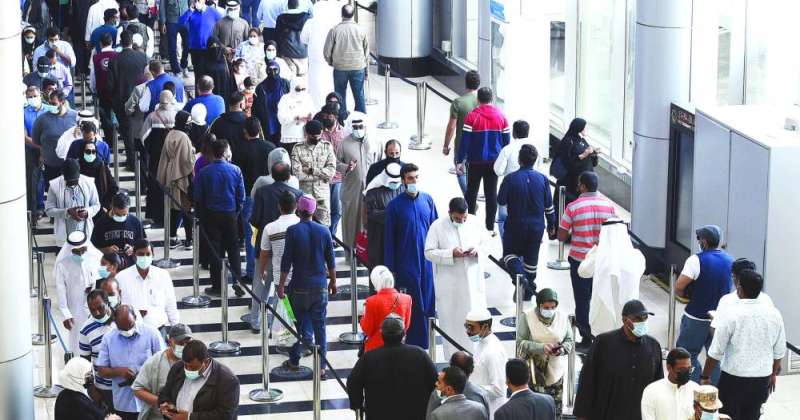 The registration of the first case with the new strain of the “Omicron” mutant of the emerging “Corona” virus awakened the spark of vaccination centers, which yesterday witnessed a great turnout by citizens and residents to take the third booster dose of the anti-Covid 19 vaccination.

“Amicron” repeated the scenes of the first period of the arrival of vaccines to the country at the beginning of this year, as those wishing to receive the vaccination flocked to take the third dose, especially after the vaccine manufacturers, led by Pfizer, confirmed that initial laboratory studies showed that 3 doses of the vaccine work. On the neutralization of the mutant «Omicron».

According to “Pfizer”, the data showed that the third dose of the vaccine increases neutralizing antibodies by 25 times compared to two doses against the “mutant”.

It seems that these results, and the registration of the first infection with the new mutant in the country the day before yesterday, and the continued encouragement of the Ministry of Health and the heroes of the “White Army” to receive “promotions” … are all cumulative factors that encouraged many to receive the vaccine, as the vaccination center appeared in the fairgrounds. In a yard supervisor, there is a race between those who wish to obtain the third dose, and some of them have returned due to the great crowding.

While the center doubled the number of nurses and organizers to meet the heavy requests by those wishing to take the third dose, a medical source hinted to “Al-Rai” to “the possibility of returning to work according to the previous organization to take the third dose, so that a message arrives to the concerned person specifying the date, and those who are not received are not received.” He has an appointment in advance, in order to organize the work and meet the large influx.”

He pointed out that the Ministry of Health had allowed those who wished to receive the booster dose to go to the Mushrif center without an appointment, but the lack of this dose being mandatory made many refrain from receiving it, but the new “mutator” returned and changed their accounts.

You intend to travel… “Take the third”

Dr. Fahd Al-Najjar published the results of the first study from South Africa, which includes only the first two weeks of the spread of “Omicron”, and they came as follows:

19% are children under 9 years old

The study confirmed that the third dose controlled the most deceptive mutant of the immune system (beta), according to Al-Najjar, who concluded by saying: “You intend to travel, take the third.”

Citizen Aisha Muhammad said that she came to the vaccination center to take the third dose, in compliance with the advice of doctors who stressed the need to take it to confront the new “mutant”.

She added, “The organization is good, despite the crowding and queues that reached outside the center hall.”

For his part, citizen Salem Majid said that “the crowding is severe and I felt suffocated due to the long queues,” wishing that there would be a special center for vaccinating the elderly instead of chaos with the presence of all groups.

Speaking to Al-Rai shortly after receiving the dose, he added, “It was a long time to reach the vaccination room, as it was tiring and exhausting for me, and I am currently feeling dizzy and tired because of the long standing.”

In the same context, the citizen Umm Faisal, who came with her daughter to the vaccination center, said, “She came to take the third dose based on the advice of doctors, and we ask God to protect everyone from diseases and protect Kuwait from all evils and epidemics.”

She added, “The organization process is good and I arrived at the center with my daughter, and there was a reception by the organizers who stood outside to help the elderly reach the center.”

Al-Jarallah: We are optimistic and do not tolerate

Khaled Al-Jarallah, head of the Supreme Advisory Committee to Confront “Corona”, stressed that taking the vaccine in its three doses and permanent activation of precaution and preventive vigilance, contribute to the continued decline of the epidemiological situation and the state of openness, adding, “We are optimistic and do not tolerate and support the efforts of the state.”

He added that disclosure, after verifying the genetic sequence of the new mutant, is a behavior that is consistent with international guidance and professional principles.

Fahd Al-Najjar: It is contrary to science…

Consultant Internal Medicine and Gastroenterology, Dr. Fahd Al-Najjar, said that “entering the virus with a vaccinated person without symptoms is a common and scientifically known matter, but that this event is used to deceive us that the vaccinated people are like the unvaccinated, which is against science.”

Al-Najjar explained that the chance of transmission from an unvaccinated person is greater, and the chance of an unvaccinated person being infected and entering hospitals and putting pressure on the health system is greater, but he stressed at the same time that there is no need to panic at all, “we are a society, the majority of which is immune.”

He pointed out that border measures delay the entry of viruses and do not prevent them 100 percent, referring to what happened in New Zealand, which closed its borders strictly, and then the virus entered it.

Al-Najjar referred to one of the studies conducted on 840,000 people and published in the most prestigious medical journals, “The New England Journal of Medicine”, noting that it showed that the death rate from “Covid 19” in the group that received two doses of the “older than 50 years” category was greater than in the third dose group, as the “third” dose of Pfizer reduced the death rate by 90 percent.

ABOUT US
MyKuwaits is an English News Website that provides Kuwait local News, World News, Sports, entertainment. We provide you with the latest breaking news and videos straight from the State of Kuwait.
Contact us: a[email protected]
FOLLOW US
© All Rights are Reserved @MyKuwaits. Launched 2020
MORE STORIES