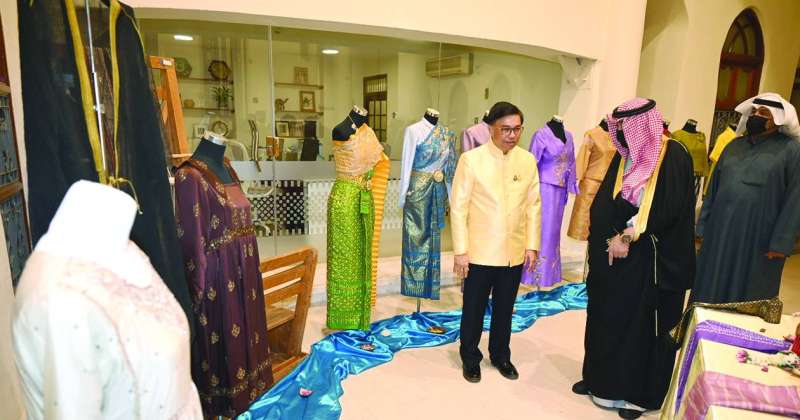 – Tamungkol:
– Dusit Princess Hotel plans to build a branch in Mahboula
The opening of a Thai supermarket in Kuwait next year
Inviting some Thai companies specialized in alternative energy to invest in Kuwait

Kuwaiti Assistant Foreign Minister for Asian Affairs Ambassador Walid Al-Khubaizi affirmed the depth of bilateral relations between Kuwait and the Kingdom of Thailand at all official, parliamentary and popular levels, pointing out that political and diplomatic relations between the two countries were established in 1963, and Kuwait will celebrate in the year 2023 the 60th anniversary of establishing diplomatic relations Between the two countries.

In a statement to reporters on the sidelines of his participation in the Thai Embassy’s celebration of the National Day, which was held yesterday evening at Sadu House, Al-Khubaizi praised the level of existing cooperation and efforts made by the governments of the two countries in combating the Corona virus (Covid-19) pandemic.

Al-Khubaizi praised the efforts of the Thai government for its facilities provided to Kuwaitis who visit Thailand for medical treatment and tourism, explaining that it grants them a visa upon arrival at the airport, expressing his happiness for signing an agreement regarding mutual exemption from pre-entry visas for holders of diplomatic, special and official passports between the two countries, last November. This year, the Ministry of Foreign Affairs of the Kingdom of Thailand.

In turn, the Thai ambassador to the country, Roj Tamongkul, said that his country celebrates the National Day and Father’s Day, which falls on December 5, which is the birthday of the former king of Thailand, who is adored by all the Thai people, pointing out that the title of the ceremony is textiles, so the Sadu House was chosen to celebrate this occasion. , given the traditional convergence in this field.

He stated that his country’s friendship with Kuwait extends for 58 years, and it is a long-term relationship, and his country’s armed forces have previously participated in peacekeeping forces, and there have been large visits between leaders and officials of the two countries.

While he indicated that the number of Kuwaitis who visited his country for medical tourism last year reached 75,000 Kuwaitis, but the Covid pandemic limited these numbers.

He revealed his country’s intention to open a Thai supermarket in Kuwait next year, and the Dusit Princess Hotel is planning to build a branch in Mahboula.

Regarding mutual investments between the two countries, Tamongkul said, “Some Thai companies specialized in alternative energy have been invited to invest in Kuwait.”

Regarding the number of the Thai community residing in Kuwait, Tamongkul said, “There are about 1,200 Thais, some of their women are married to Kuwaitis, and others work in different sectors such as construction, spa and restaurants.

Regarding the situation of Corona in his country, he explained that the numbers are still high compared to the numbers in Kuwait, but our population is 70 million, and more than 70 percent of them received the second dose of the vaccine, and this is the reason for reopening our country to tourists.

Reciprocal visits at the level of Asia

Al-Khubaizi revealed the existence of a number of important mutual visits between Kuwait and a number of Asian countries, saying: “We are waiting for the visit of the Indian Prime Minister, which is scheduled to take place in the first week of next January,” pointing to the preparations for this visit, which he described as important, as there are relations strong between Kuwait and India.

He added, “There are visits and tours by Foreign Minister Sheikh Dr. Ahmed Al-Nasser to China and Japan during the next year,” referring to the strong relations between Kuwait and the Asian continent.

He pointed out that there are many political diplomatic projects that will be prepared soon.

Speaking about the deputy minister’s meeting with the US envoy to Iran, and whether there is a role for Kuwait, especially with the visits made by the Iranian deputy foreign minister, which indicates a breakthrough with the Gulf countries, Al-Khubaizi said, “This is only a briefing. The US envoy to Iran informs the allies of the situation and the progress of the ongoing negotiations in Vienna only, and so far we have neither heard nor read that there is any progress in these negotiations, and we hope that there will be positive results of the negotiations.”

Speaking about the Kuwaiti-Iranian relations and the return of committees and visits between the two countries, Al-Khubaizi said, “We are preparing until the opening of the opportunity, as there was a recent visit by Iranian Deputy Foreign Minister Ali Bagheri to the country, where he briefed us on the position of the Vienna talks. Some ideas and suggestions for developing relations.