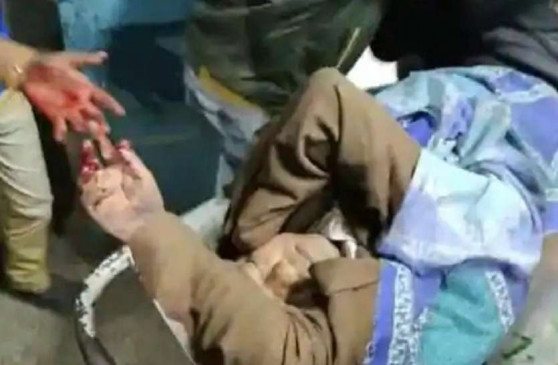 Digital Desk, Kolkata. In West Bengal, with the Assembly elections looming, the bloody game of politics is on the rise. Labor Minister Zakir Hussain attacked unidentified assailants at Nimitta railway station in Murshidabad district around 10 pm on Wednesday. Zakir, who was critically injured in the attack, was rushed to the Jangipur Sub-Divisional Hospital, from where he was shifted to Kolkata. Police are investigating the matter. Since this incident, there has been an overall tense atmosphere in the area.

According to police, two other people accompanying the minister were also injured in the attack. According to the latest information, Minister Zakir Hussain is being brought to Kolkata. AK Berra, a doctor at Murshidabad Medical College and Hospital, said the minister’s condition was stable at present.

The video of the incident went viral on social media
The incident can be seen in the video in which the condition of the seriously injured minister can be seen. In this video you can see how the minister was rushed to the hospital in a hurry.

Waiting for the train to reach Kolkata station
A senior West Bengal police official said the assistant minister of labor was waiting for a train bound for Kolkata at 10 pm on platform number two of Hussain station. He said the MLA and two others were shifted to Jangipura Sub-Divisional Hospital from Jangipura in Murshidabad district. The scene of the incident falls under the purview of Suthi police station.

BJP-TMC activists clashed in Kolkata
Meanwhile, there were reports of BJP and TMC activists clashing with each other. BJP leaders marched towards the office of the Deputy Commissioner in Fulbagan area to get information about a case. Then Trinamool Congress activists started chanting slogans. After this, the two sides held talks and parted ways with each other. Bricks and stones rained down from both sides. Many of them were injured.

ABOUT US
MyKuwaits is an English News Website that provides Kuwait local News, World News, Sports, entertainment. We provide you with the latest breaking news and videos straight from the State of Kuwait.
Contact us: [email protected]m
FOLLOW US
© All Rights are Reserved @MyKuwaits. Launched 2020
MORE STORIES