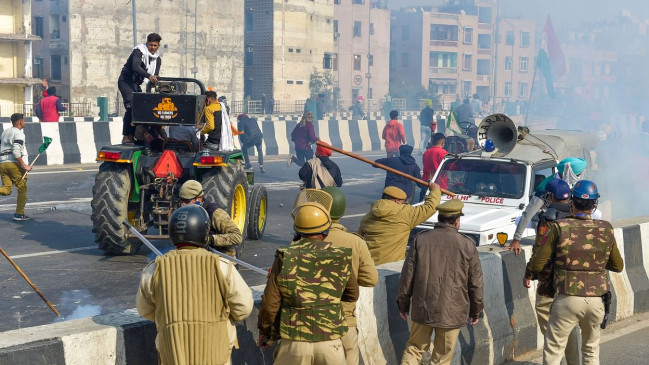 Supporters of former President Donald Trump in the United States witnessed the violence on Capitol Hill on January 6, saying that the violent events on Republic Day on January 26 and the demolition of the Red Fort had caused similar sentiments and reactions in India. Next

A spokesman for the U.S. State Department told the Wall Street Journal on Wednesday that the Biden administration believes that peaceful demonstrations are the hallmark of any successful democracy. We encourage differences between parties to be resolved through dialogue.

In its first reaction to the peasant movement, the United States said it was promoting the resolution of differences between the two sides through dialogue. In addition, some farmers have criticized the Indian government for shutting down internet services in protest areas and surrounding areas.

Meanwhile, during his weekly briefing on Thursday, Foreign Ministry spokesman Anurag Srivastava hit back at the US. “We have noticed the US State Department’s comments on agricultural laws,” Srivastava said.

He said the violent incidents on January 26 on the occasion of Republic Day and the demolition of the Red Fort had created similar sentiments and reactions in India as seen after the Capitol Hill incident in America on January 6.

Interestingly, the Indian Ministry of External Affairs on Wednesday strongly objected to the international response on the performance of farmers. India has said that the Indian Parliament has passed the Reform Act, which has very few farmers who have some objections and that the Act will be suspended until the negotiations are over.

Respecting the protesters’ sentiments, the Union government held a series of talks with its representatives and the Union Minister took part in the talks, the foreign ministry said. Already 11 rounds of talks have taken place. According to the ministry, the government has also moved to repeal the laws, which the Prime Minister himself has proposed.

He said it was unfortunate that selfish groups were trying to impose their agenda on these demonstrations and mislead them. It was observed on the occasion of Republic Day. A national monument was damaged in the Indian capital on the day of the country’s constitution, violence and destruction.

The ministry said the demonstrations were carried out by the Indian police force with complete restraint. Hundreds of women and men working in the police were attacked and in some cases attacked with sharp weapons and seriously injured. The ministry said parliament had passed reformist bills related to the agricultural sector.