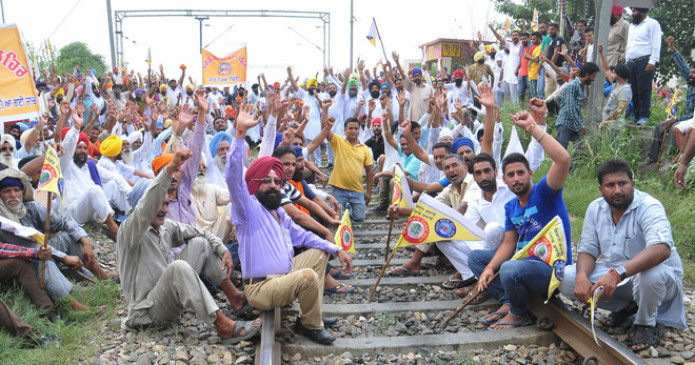 Digital Desk, New Delhi Delhi. Farmers have been protesting along the Delhi-Delhi border for the past two and a half months, demanding the repeal of agricultural laws. Indian Kisan Union (BKU) spokesperson Rakesh Tikait on Wednesday announced that farmers’ unions opposing the Centre’s new agricultural laws would launch a nationwide rail rococo movement on Thursday. The protest will take place from 12 noon to 4 p.m. In such a situation, Indian Railways has deployed additional troops to protect passengers and stations.

Speaking to IANS, Tikait said the center has not allowed many trains to run for the past eight months, despite people getting in trouble and lifting many other restrictions. The BKU leader said people from his villages would also take part in the protest. Arrangements have been made for children traveling on trains.

The railway is in alert mode regarding the railway stop campaign
The Railways is in alert mode regarding the farmers’ rail stop announcement. There has been an increase in railway problems as there have been no accidents during the operation of trains. Therefore, the Railway Police maintained relations with the State Government and also deployed the RPF Battalion. The main focus is on Punjab, Haryana, Uttar Pradesh and West Bengal. The RPF Director General said that the governments were in touch with the states to maintain peace.

Deploy additional RPF company
The rail administration, cautious with the Rail Rocco announcement, will deploy 20 additional RPSF companies. Farmers in Uttar Pradesh, Punjab and Haryana are expected to hold fiery demonstrations, so the focus of these organizations will be on these states.

New details in the crime of the Salmiya girl

New details in the crime of the Salmiya girl