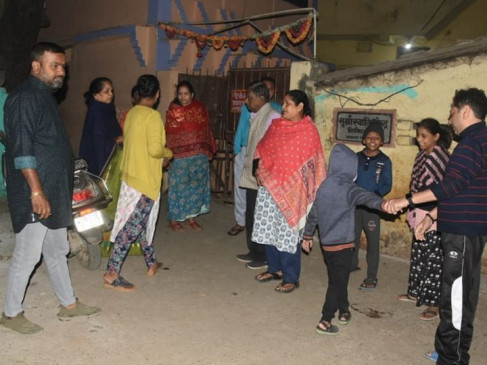 Digital Desk, New Delhi Delhi. The country was hit by two earthquakes on Monday. The quake struck at 4.1 pm in the Andaman and Nicobar Islands at 7.23 pm. This was followed by reports of earthquakes at 9:30 pm in several districts, including Jammu and Kashmir and Patna, the capital of Bihar. However, property damage was not reported anywhere.

The epicenter was reported below the Pacific Ocean floor, according to the National Center for Seismology. The quake affected several districts in southern and northern Bihar, including Patna, at 9.25 pm on Monday. Their severity is 3.5. Due to fear, people in some areas, including Patna, were forced out of their homes. It vibrated for about 30 seconds. The quake affected Boring Road, Ashiana Nagar and Patel Nagar in Patna. At the same time, earthquakes shook several districts, including Bhagalpur and Gaya. The epicenter was reported 20 kilometers south of Nalanda.

Characters fell on homes due to the earthquake
Neha, who lives on Boring Road, said she was cooking in the kitchen when the sound of falling pots started coming. Niveda Raj, who lives in Pataliputra Colony, said she was also cooking in the kitchen and suddenly felt trembling. Shailendra Singh, of Shivpuri, said Suman Kumar was taking food while sitting on the floor when the tremors struck at 9.23 pm.

On February 12, an earthquake shook northern India, including the Delhi-NCR
Earlier on Friday, the quake affected several northern Indian states, including India-NCR, Jammu and Kashmir, Ladakh, Himachal Pradesh and Punjab. The quake affected several cities in Uttar Pradesh and Uttarakhand. The epicenter was reported 74 kilometers south of Tajikistan. The magnitude of the earthquake was 6.3 on the Richter scale. People in most districts of Kashmir division from Kashmir Valley felt the quake and fled their homes.

The National Seismological Center initially identified the epicenter as the epicenter in Afghanistan and Amritsar, but after investigation the epicenter of the quake was found in Tajikistan. The quake, which struck at 10.31pm, lasted for 40 seconds. People were evacuated from their homes in Delhi NCR as the tremors were severe.

Bihar earthquake falls in zone 5
India is divided into Zone-2, 3, 4 and 5 based on the seismic risk. Zone-2 is considered the least dangerous and Zone-5 is considered the most dangerous area. Most parts of southern India fall under the limited threat zone-2. Central India is also in the low risk zone-3. At the same time, Zone-4 includes Jammu and Kashmir, Ladakh, Himachal Pradesh, Uttarakhand, Sikkim, North Bengal, Delhi, Delhi and Maharashtra. Zone-5 includes Jammu and Kashmir, the western and central Himalayas, northern and central Bihar, northeastern India, the Rann of Kutch and the Andaman-Nicobar Islands.

In 2015, a strong earthquake shook Nepal
Monday 25 April 2015 earthquake in Patna came to mind. A magnitude 5.3 earthquake then shook Nepal, killing at least 8,000 people and injuring more than 2,000. Due to this, there were many tremors in Bihar as well. In northern Bihar, people, including Sitamarhi, Sivahar and the adjoining Darbhanga in Nepal, were in a state of panic for days.

The magnitude of the earthquake was as follows
The intensity of an earthquake is measured by the energy waves emanating from its center (the epicenter). The wave vibrates for hundreds of kilometers. There are cracks in the ground. If the center of the earthquake is at a shallow depth, the energy coming out of it will be too close to the surface, causing great damage.